Sea Towns Puglia: the most beautiful sea places in Puglia 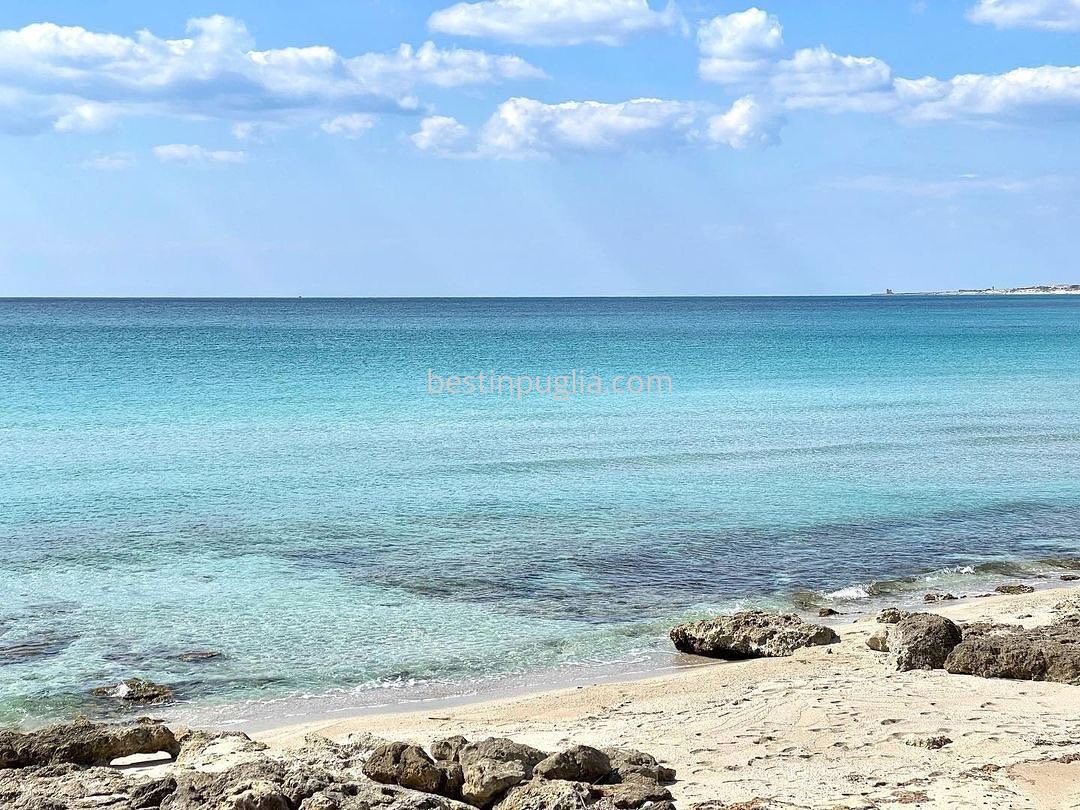 Puglia offers visitors hundreds of seaside places where they can enjoy holidays and healthy relaxation. In this post we recommend some of the most beautiful seaside resorts in Puglia.

Bari is the capital of the Puglia region and the largest seaside city in Puglia. Its ancient history, the commercial port, the tourist port, the historic center by the sea make it one of the most beautiful seaside cities to visit. The historic center is a real jewel that preserves monuments and pieces of history from the different eras from the Neolithic to the Baroque. In the city there are free beaches that you can visit, seaside restaurants and clubs. To enjoy the most beautiful seaside places in Bari, just go outside the city. Bari is very easy to reach thanks to the Puglia airport in Bari just outside the city. Bari is the capital of the Puglia region and overlooks the Adriatic Sea.

Polignano is the most characteristic town on the Adriatic Sea in the province of Bari and perhaps in all of Puglia. The historic center of Polignano a Mare is built on a cliff 20 meters above sea level. Walking through the historic center, or taking a boat ride, you can admire a perfectly preserved town with spectacular views and perfectly integrated with the marine environment. In the historic center you can sunbathe and swim in Cala Porto, one of the most beautiful beaches in the world. The beaches of Polignano a Mare are many and are located both in the city center and outside.

Monopoli is a wonderful town not far from Bari. The characteristic historic center, the port and the ancient farms near the sea make it one of the most suggestive places to visit and to stay. the historic center of Monopoli embraces the sea with the Carlo V Castle which dominates the port and a series of wonderful coves right in the city center such as Cala Porta Vecchia Beach, Cala Cozze and Porto Bianco. Many of the beaches of Monopoli are located just outside the city, where you will find seaside places to visit such as Porto Ghiacciolo, Cala Verde, Cala Cerasa, Cala Sottile and others.

Vieste is one of the most spectacular seaside towns built on a rocky peninsula of the Gargano promontory on the Adriatic Sea. Vieste is famous for its beaches nestled in a rocky and wooded natural landscape, unique in Puglia. All around Vieste, reachable either on foot from the city center or by car or public transport, you will find many beaches, the vast majority of which are of very fine sand. If you can organize a boat trip you can reach the nearby Tremiti Islands or enjoy the nearby coves and caves.

Marina di Ostuni is the seaside place that is a few kilometers from Ostuni and which offers numerous opportunities to lovers of the sea, nature, history and good food. Ostuni Beaches extends on the Adriatic Sea from the Natural Park of the Coastal Dunes to the north near the maritime hamlet of Pilone, with the beaches of Lido Morelli and Lido Bosco Verde, to the hamlet of Santa Lucia with the wonderful beaches of Torre Pozzella.

Brindisi is the most populous city of Salento, the provincial capital, overlooking the Adriatic Sea and is a point of passage for many travelers who visit the south of Puglia. The city has an ancient history linked to its fortunate position on the sea and its important natural port which is the vital center of the city. Brindisi is located in a very favorable position for those who want to visit Salento, with Ostuni, Lecce, Otranto and the Ionian coast less than 1 hour by car. Puglia airport in Brindisi and the tourist port offer many tourists the opportunity to visit the city.

Otranto is a spectacular seaside place south of the Salento peninsula on the Adriatic Sea. The perfectly preserved castle dominates the historic center. The ancient walls are perfectly preserved and enclose the whole center with its ancient buildings and characteristic streets. On the promenade at the foot of the castle, near the tourist port, you will find the small beach of Caletta del Molo and a little further on, still in the center, a series of lidos and beaches until you reach Spiaggia dei Gradoni. Around Otranto there are some of the most beautiful beaches in Salento such as Baia del Mulino d’acqua and Baia dei Turchi.

Punta Prosciutto is a seaside town near Porto Cesareo, in the province of Lecce, in Salento on the Ionian Sea. It is a quiet seaside resort with wonderful beaches of golden sand and crystal clear waters, not far from San Pietro in Bevagna and Porto Cesareo. The main feature of Punta Prosciutto is the wild nature of the sea dunes, which with the Mediterranean scrub dominate the entire coast and most of the beaches.

Pescoluse is a seaside resort in the province of Lecce on the Ionian coast. The coast is characterized by the presence of dunes, wonderful sandy beaches with shallow waters and lush Mediterranean scrub. Pescoluse is the famous seaside place in Puglia for having the clearest and thinnest sand of all beaches, with very clear water thanks to the southern exposure and the favorable position with respect to the currents.

Gallipoli is one of the most suggestive seaside places in western Salento, on the Ionian Sea, in the province of Lecce. Its historic center is distributed partly on an island of limestone, which connects with the mainland through a bridge dating back to the seventeenth century, and partly in the "new village" built on the mainland. Both on the island and on the mainland, in the center, there are wonderful sandy beaches. Not far from Gallipoli it is full of beaches, coves and marinas where you can enjoy the sea and the sun.

Porto Cesareo is one of the seaside resorts in the province of Lecce in Eastern Salento, on the Ionian Sea. The beaches of Porto Cesareo are one of the favorite destinations for visitors for the beauty of the coast, thanks to the presence of the Marine Protected Natural Area, the Palude del Conte Regional Nature Reserve and the Isola dei Conigli not far from the coast. Inhabited since prehistoric times Porto Cesareo (at the time Portus Sasinae) was an important port for agricultural trade with rich inland areas. The sea in Porto Cesareo is crystal clear and the white sand bottoms are low and rich in protected marine flora and fauna.

Santa Maria di Leuca is the seaside town located in the most extreme part of Salento, in the south of Puglia in the province of Lecce. It directly overlooks the Mediterranean Sea and is located halfway between the Adriatic Sea and the Ionian Sea. The town of Santa Maria di Leuca is a typical seaside resort in Puglia, with a tourist port, historic center and a wonderful sea. Santa Maria di Leuca is characterized by the majestic white rock walls of the promontory perpendicular to the sea. The area of ​​Santa Maria di Leuca encloses the homonymous promontory, where the Basilica and the Lighthouse are located. The seaside area with services for bathers, Marina di Leuca, extends from Punta Mèliso and Punta Ristola

Santa Cesarea Terme is a seaside town in the province of Lecce, in eastern Salento, just north of Santa Maria di Leuca. Santa Cesarea Terme, a few kilometers from Otranto, is famous for being a spa since ancient times, with natural hot water springs that flow in some of the caves in the place. The coastal area of ​​Santa Cesarea Terme is a high and indented area, which offers visitors the view of stacks, caves and small bays where they can relax in the sun. A few years ago the Costa Otranto Park - Santa Maria di Leuca and Bosco di Tricase was established (the park aims to safeguard part of the wild coast located in this eastern part of Salento).

Campomarino is a seaside town on the Ionian coast of Salento in the province of Taranto, on the Ionian Sea. The territory is characterized by the vast cultivations with olive groves and by the vast coastal dunes with Mediterranean scrub present on the coast. Campomarino di Maruggio is a seaside town born around Torre Moline and the ancient fortified port in the center of the town. Campomarino is famous for the beauty of the sea with its 9 km of coastline, where wild dunes dominate on wide sandy beaches.

Puglia is full of ancient villages built on the sea to visit, rich in history to contemplate and beaches to enjoy. Some villages have beaches open to the public directly in the historic center.

In the north of Puglia the spectacular Tremiti Islands and the Gargano predominate, with mountainous areas rich in woods close to the sea, majestic cliffs and long beaches. To the south there are many more seaside places as the heel of Italy is a region almost entirely surrounded by the sea.

Wherever you want to spend a holiday period, it is always good to plan in advance and book the structure that best suits us. From Holiday Villages, with All-inclusive offers and family packages, to Luxury Masserie with swimming pool, there are many offers of accommodation available among the offers to visitors.

You can rent entire Trulli, Masserie or Villas in Puglia with your family and friends, choosing whether to take care of the daily management of the property yourself or take advantage of the maintenance and cleaning services offered by the agencies.

Distributed mainly in the center-south of Puglia, from the sea up to a few kilometers inland, there are many reception services housed in wonderful farms, ancient traditional structures of the Apulian territory, which offer any type of service inside, from bar at the spa, offering wonderful, high-prestige accommodations in which to rest.

In Puglia you will find several holiday villages where you can stay in a tent, park your camper or rent a bungalow to be able to spend a few days in a natural environment just a few steps from the sea, with all the services at your fingertips.

Some villages offer all-inclusive services during certain times of the year, offering packages to families or groups of people.

The best beaches in Ostuni. Ostuni beaches, advice on the most beautiful beaches.

Porto Cesareo, 5 best beaches and what to do

Discover Campomarino di Maruggio with the Torre Saracena, the white beaches and the crystal clear sea, immersed in the Natural Park of the Campomarino Dunes