Discover artistic and historical elements, from ancient and varied agricultural and gastronomic trioaditions. 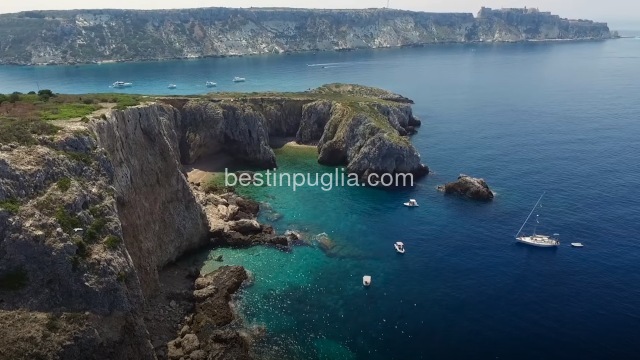 Things to do in Foggia

Things to do - Foggia

Things to do - Monte Sant'Angelo

The province of Foggia is one of the most popular destinations for Italian and foreign tourists for its wonderful combination of varied landscapes and unspoiled nature.

The crystalline sea, the varied coast, the Umbra Forest , the Gargano, the Tremiti islands are the scenography to ancient traditions and cultures still perceptible in the many historical places and in the local people.

Foggia is the largest city in the north of Puglia and is the capital of procincia. The city of Foggia is characterized, compared to other large Apulian cities, for its huge territory of 507 square km (eighth in Italy), for its huge flat part (the so-called "Tavoliere delle Puglie", at the center of which is the city), for the mountainous territories still partly unspoiled and for the splendid islands and seaside resorts of the coast.

The city of Foggia is very rich in history having been since the Neolithic crossroads of different cultures and commercial exchanges, and in the last centuries it has become the so-called "Granary of Italy" due to its centrality in the production and distribution of wheat and products agricultural of all kinds since ancient times.

Foggia was therefore a point of passage for different populations, a commercial crossroads, a crossing point from the sea to reach Rome and for some of them a place of settlement.

The heart of the city is via Arpi, a street that once housed the palace of Frederick II.

If you are on holiday in Puglia and want to visit Foggia, the main attractions are:

What to see in the province of Foggia

The whole province of Foggia is full of ancient towns, many of which on the coast, perfectly preserved.

Visiting these ancient villages is a joy for the senses and a pleasure to get to know them to spend pleasant hours in light-heartedness surrounded by history, culture, good food and hospitable and open people.

Among the many towns in the province of Foggia that are historically the best preserved and full of excitement are those on the coast.

The most beautiful places to see on the coast in the province of Foggia are:

A small archipelago in the Adriatic Sea in Italy in the province of Foggia.

The Tremiti islands are part of the " Gargano National Park " and are rich in marine life and diving spots.

The island of San Nicola hosts the abbey of Santa Maria a Mare from the 11th century, with a mosaic floor, and the Castello dei Badiali on the seafront.

The island of San Domino , covered with pine trees, has beaches and cliffs , including the Ripa dei Falconi .

The archipelago is made up of 5 islands: San Domino, San Nicola, Capraia, Cretaccio and Pianosa, which all together represent the Tremiti Islands Municipality in the province of Foggia.

Rodi Garganico is a town in the province of Foggia, south-eastern Italy, located on a promontory east of Lake Varano .

Its origins date back to the Paleolithic and Neolithic periods. According to some, the roots are linked to the ancient people of the Dauni, while, according to another version, it may have been founded by Greek colonists from Rhodes. Pliny the Elder mentions a Portus Garnae which has been identified with the modern Rodi Garganico.

The town of Rodi Garganico is renowned for the production of citrus fruits such as Oranges from Gargano and Lemon "Femminiello" from Gargano , both DOP products cultivated since the Middle Ages.

Rodi Garganico is one of the favorite destinations for tourists for the several very long beaches located both to the west and to the east of the city.

Vieste is a seaside resort in the Gargano that received from the Foundation for Education Environmental the Blue Flag for the purity of its waters.

The area affected by the municipality is also included within the Gargano National Park .

In medieval times the port was frequently attacked by pirates, Saracens and other enemies of the Kingdom of Naples.

In the sixteenth century, all of the approximately 7,000 inhabitants were enslaved by the Turks and those deemed unhealthy were executed.

This event is commemorated every year with a public ceremony.

The many beaches between Vieste and Peschici (to the north) are sandy and shallow.

Of the many beaches towards Mattinata (towards the south) only the first three, although very large, are sandy: Pizzomunno beach (or castle or scialara ), Portonuovo beach and Cala San Felice (the one known as "Architiello" and accessible only from the campsite).

The beach of Portonuovo is a fairly long beach (about two km) and is very deep. On the Portonuovo beach there are 7 bathing establishments divided by large spaces of free beach that are crowded only on Sundays.

After cala San Felice , going towards Mattinata, the beaches become pebbles, gravel and rocks. Here the seabed becomes deep after a few meters.

To visit the many beaches and places of the sea near Vieste it is advisable to travel by car and you will be spoiled for choice to spend your day.

The municipality of Mattinata faces south on the Adriatic Sea and is part of the Gargano National Park .

The birth of Mattinata originates from tribes mainly from Greece and Eastern Europe.

The first humans to settle in the area were tribes of Eastern European origin, mainly from Greece and the Balkans (Iapyges) who populated the area and surrounding areas.

The name Mattinata dates back to the Roman village of Matinum, which in the 1st century AD was located near the current seaport.

Few traces of the Roman settlement can still be seen. The modern country has come to be formed with the immigration, over the centuries, of the citizens of a neighboring country, Monte Sant'Angelo (of which it was a fraction before gaining independence as a municipality in 1955). Among the most important tourist attractions in the area is the Sanctuary of San Michele Arcangelo .

The town is located between two hills enclosed all around by mountains. and towards the east it develops over a plain ( Piana di Mattinata ) overlooking the Adriatic Sea.

The coast north of Mattinata is famous for its huge white chalk cliffs , the numerous and fantastic sea caves but above all for its two Faraglioni located in the area of ​​ Baia delle Zagare .

Around Mattinata there are about 60 species of orchids and for this reason the area is a destination not only for many tourists but also for botanical experts.

Manfredonia is an Italian city and municipality in Puglia in the province of Foggia, which is 35 kilometers away. Manfredonia is located on the coast, facing east, south of Monte Gargano , and gives its name to the gulf east of it.

The area of ​​present-day Manfredonia was inhabited in ancient times by the Greeks, founded by Diomede. The thriving Greek colony, which fell into the hands of the Samnites, was reconquered around 335 BC by King Alexander of Epirus, uncle of Alexander the Great.

The city of Manfredonia is a particularly popular destination for seaside tourism.

The historic center overlooking the sea is wonderful, the Marina del Gargnano or the new tourist port on the Adriatic that can accommodate large boats and yachts.

The 20 kilometers of coastline in the southern part of Manfredonia are a succession of free beaches and equipped bathing establishments that offer tourists a wide range of choices.

The northern coast, called Acqua di Cristo , is instead in a small rocky part and the remaining part of the coast is characterized by an immense shoreline of very fine golden beach.

In the vicinity of Manfredonia, noteworthy for its beauty, there is Siponto Lido , a seaside resort made up mostly of villas and summer residences surrounded by greenery.
Nello the same place stood one of the oldest cities in Italy, the Roman colony of Siponto.

The site is today one of the most interesting Roman archaeological areas in Italy.

From the Neolithic, to the Aragonese and Bourbons: history of the city of Foggia

There are already signs of the first permanent human presence in Foggia starting from the Neolithic .

The whole province of Foggia is rich in areas where necropolis and signs of human presence and agricultural activity have been found since ancient times.

The construction of the city itself is traced back to the Romanesque age (about 3200 years ago) by Diomedes a few years after the end of the Trojan War and it was the only Italian city ally of the Carthaginians against Rome.

Over the centuries that followed, the city of Foggia was the victim of numerous destructions and assaults.

It was razed to the ground by the Goths in 545 and the population dispersed throughout the surrounding territories for centuries.

The city of Foggia repopulated in 1050 thanks to the reclamation commissioned by the then Norman count Roberto il Guiscardo who a few years later, in 1059, was invested by Pope Nicholas II with the title of Duke of Puglia and Calabria and Lord of Sicily.

In past centuries the main event in the history of Foggia is linked to transhumance.

The Aragonese , in 1447, imposed a tax on all shepherds who brought their flocks to graze in the Foggia plain.

To manage and obtain income, the Aragonese established and built the Customs House of the Sheep, a series of palaces and headquarters of the royal authorities, still well preserved and open to visitors.

The authorities got rich but the peasant population, especially in the south, became very impoverished and caused the formation of swamps in the abandoned fields.

In 1546 a tremendous earthquake devastated the city and subsequently in 1534 and in 1627 two other terrible earthquakes struck Foggia again, leaving very little of the important artifacts and ancient historic buildings still preserved.

Due to the war between France and Spain, the city suffered a severe looting in 5000 which ended up stripping it of all those historical artifacts left over after natural disasters.

The sacking reduced the population of the city of Foggia to about 1000 inhabitants.

Another earthquake hit the city again in 1731, destroying a third of the houses.

Despite the earthquake, the city of Foggia reacted by triggering and contributing to a strong recovery: building new neighborhoods, strengthening the production and marketing of cereals and culturally enriching the city thanks to the approval of the Bourbons.

The Bourbon government gave an important impetus to the agricultural development of the city of Foggia and the province trying to evolve the economic system of the " Capitanata " (as the area that extends from the Dauni Mountains is called al Gargano).