Taranto, nicknamed the "City of the two seas" due to its position between the Mar Grande and the Mar Piccolo. It is one of the largest ports in the Mediterranean. 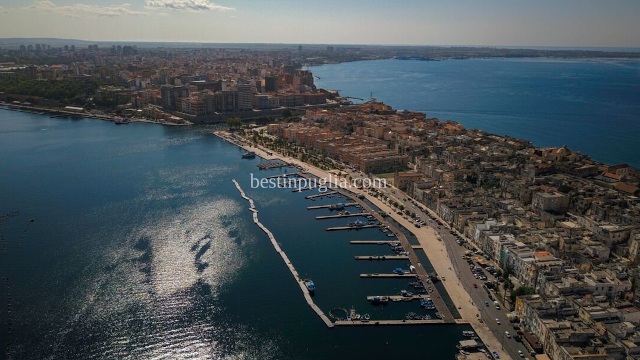 Things to do in Taranto

Martina Franca, what to do and what to see in the city of art of the murge

Things to do - Martina Franca

Taranto is nicknamed the city of two seas, thanks to its particular position straddling the Mar Grande and Mar Piccolo.

The city of Taranto is located on the Ionian coast of Puglia, in the innermost area of ​​the great gulf to which it gives its name. It has one of the most important ports in the Mediterranean. The city is divided into three urban centers: the Old Town, of medieval type, is an island linked to the mainland by two bridges, one of which is the well-known swing bridge; the second nucleus consists of the New City, which developed in the last decades of the 19th century, and the Porta Napoli area, of an industrial nature.

The best way to discover the beauty of the city is to take Corso Vittorio Emanuele III, a road that runs alongside the sea and offers a wonderful view of the Ionian Sea.

The symbol of the city is the Aragonese Castle , which is located at the very beginning of the Old City.

The castle watches over the city and is located in a position of protection of the Mar Piccolo.

The castle was built in 1486 by Ferdinando I of Naples. Before those years the building was made up of tall and slender towers, but with the inventions of cannons and gunpowder it was necessary to modify the structure with smaller and larger towers. Today the Castle is managed by the Navy.

The old city is connected to the new city by the Ponte Girevole and the Ponte di Porta Nuova. Right next to the castle is the Town Hall with the famous three columns of the Doric Temple. These are the oldest Doric columns of ancient Greece.

Among the churches, the Cathedral of San Cataldo deserves our attention, dedicated to the patron saint whose name it bears. It is located in the center of the old city and is the oldest Apulian cathedral.

The Cappellone , of elliptical shape, is noteworthy, it is characterized by the marble decoration that continues downwards from the Corinicione. Around it you can see five niches that keep statues, the most important is the central one, where the silver statue of San Cataldo is kept.

Not to be missed is a visit to the MARTa, the National Archaeological Museum .

Here you can discover not only the history of Taranto but also of Italy.

The museum is in fact considered one of the most important in all of Italy.

Inside the MARTA you can admire many finds from the period in which the city was a Spartan colony in Magna Graecia.

The museum gives the opportunity to relive the entire history of the city starting from the medieval period.

Of particular interest is the collection of the Golds, an exhibition of many jewels that belong to ancient times but which seem to be of a modern age.

To better discover this wonderful city, you can book guided tours through the streets of the historic center.

Taranto offers the opportunity to spend a few hours with the dolphins.

In fact, the Jonian Dolphin Conservation (JDC) is very famous, an association that is committed to the protection of the sea and cetaceans.

It is precisely from the Sant’Eligio pier that you can book a catamaran excursion, thus navigating the Apulian coast you will be able to spot the dolphins that have lived in this sea for many years.