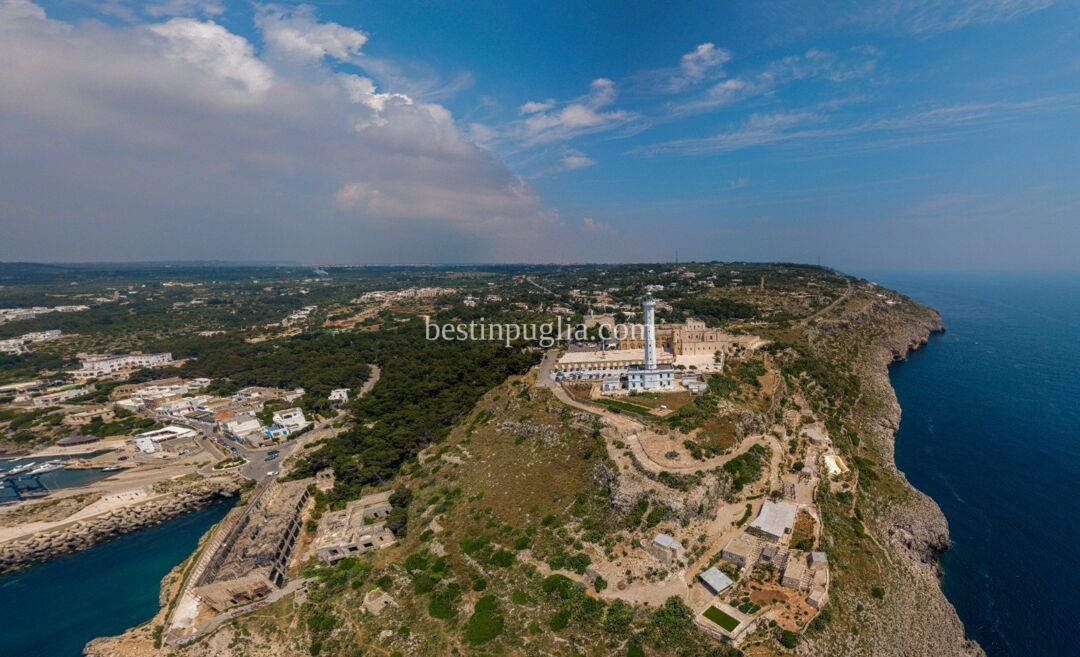 Santa Maria di Leuca is located in the municipality of Castrignano del Capo, in the province of Lecce, and is the southernmost point of Puglia.

Santa Maria di Leuca is the promontory in the extreme tip of Puglia on which the Basilica and the Leuca Lighthouse are located, right on the dividing point between the Adriatic and the Ionian Seas.

Its name originates in the Greek language from Leukos, which means white, and which is probably due to the white rocks overlooking the sea in the area.

How is the sea in Santa Maria di Leuca?

The sea in Santa Maria di Leuca is clear and crystalline. The rugged coast is characterized by rocky areas and sandy areas.

The part of the rocky coast is characterized by small coves and caves that you can visit by booking a boat trip.

The rocky coast of Santa Maria di Leuca is characterized by the presence of numerous sea caves that can be reached by boat.

Boat trips to visit the caves can be easily booked once on site, directly where you are staying, in one of the beaches or tourist centers of the place.

Among the most beautiful sea caves in Puglia in Santa Maria di Leuca there are:

There are many caves to visit and each of them has its own particularities and curiosities. The Devil's Cave is of Neolithic origin and was named after the powerful rumble that could be heard inside. The Cave of the Child is an area of archaeological significance due to the findings of the bones of elephants and rhinos. The Dragon's Cave takes its name simply from its shape, while the Cave of Joel is characterized by the presence of crows and for being the site of a splendid swimming pool covered with fresh waters.

On the promontory of Santa Maria di Leuca, near the Ciolo area, you can enjoy a truly breathtaking landscape, where the coast is high and the sea is a true paradise.

To go down to the sea you will have to take a narrow path that goes down along the rocky wall.

If you love diving, here you can experience diving from high heights.

The things to see in Santa Maria di Leuca are:

What to do in the evening in Santa Maria di Leuca

In the evening in Santa Maria di Leuca you can take a pleasant walk in the small town, enjoying the sea breeze and the fantastic sunset.

Especially during the summer you can stop in one of the many bars and clubs to enjoy aperitifs and dinners directly by the sea.

In Santa Maria di Leuca and its surroundings it is possible to visit some of the most beautiful coastlines of Salento.

The area is characterized by the high and indented coast, with the alternation of sandy beaches and coves where you can relax in the sun until sunset.

Punta Meliso, in Santa Maria di Leuca, closes, together with Punta Alice in Calabria, the Gulf of Taranto and represents precisely for this reason the most extreme part of Puglia.

In Santa Maria di Leuca, at Punta Meliso for precision, the Adriatic coast and the Ionian coast are separated by nautical convention.

But beyond the convents right at Punta Meliso, a clearly distinguishable separation line on the seabed between the two seas is sometimes visible in the sea, due to the currents that meet between the Otranto channel on the Adriatic Sea and the Gulf of Taranto on the Ionian Sea.

The Villas of Santa Maria di Leuca are distinguished by their unique architectural features but they share some elements and services that almost all of them offer.

Each Villa of Santa Maria di Leuca usually has a park in front of the villa, with a tree-lined avenue leading up to the main entrance door.

At the rear of the main building of the villa there is a garden which is also used to produce fresh fruits and vegetables.

Also in the back of the villa there is often a private chapel.

Inside the Villa there is historically a well for the collection of drinking water, a stable for horses and a shed for carriages, which over time have been converted into habitable structures.

The approximately 50 villas are located along the coast and many of these are open to the public to be visited.

A very particular feature of the nineteenth-century villas is that some were equipped with a small cliff of the "huts" with an adjoining bagnarola.

Built in the same style as the villa, it was used by noble women to hide while bathing during the summer months.

Santa Maria di Luca in Puglia is a beautiful seaside town located in the extreme part of the heel of Italy, in the southernmost point of Puglia.

You will find a wild landscape characterized by a jagged and high coast. With an alternation of sandy beaches and coves in which to relax in the sun.

Beyond the various points of interest around the Basilica, the Lighthouse and the historic center of the town, Santa Maria di Leuca is a town famous for its mild climate and with little rainfall all year round.

Thanks to the favorable climate since the 19th century, Santa Maria di Leuca is a renowned destination for travelers from all over the world who built their summer residence there.

Today in Leuca there are about 50 villas dating back to the nineteenth century, many of which have lost some of their original characteristics due to the vicissitudes of the war and history in general.

Where the two seas meet in Puglia

Santa Maria di Leuca represents the point where the two seas, the Adriatic and the Ionian, meet in Puglia.

A famous legend tells that in the locality of Santa Maria di Leuca there was the first landing of Aeneas and later of St. Peter coming from Palestine to Rome. A Corinthian column was erected in his honor in the square in front of the Basilica.