Polignano a Mare Beaches: The best beaches of Polignano!

Polignano a Mare has fantastic beaches set in a breathtaking landscape. The wild nature of the sea marries the art, culture and history of the area. 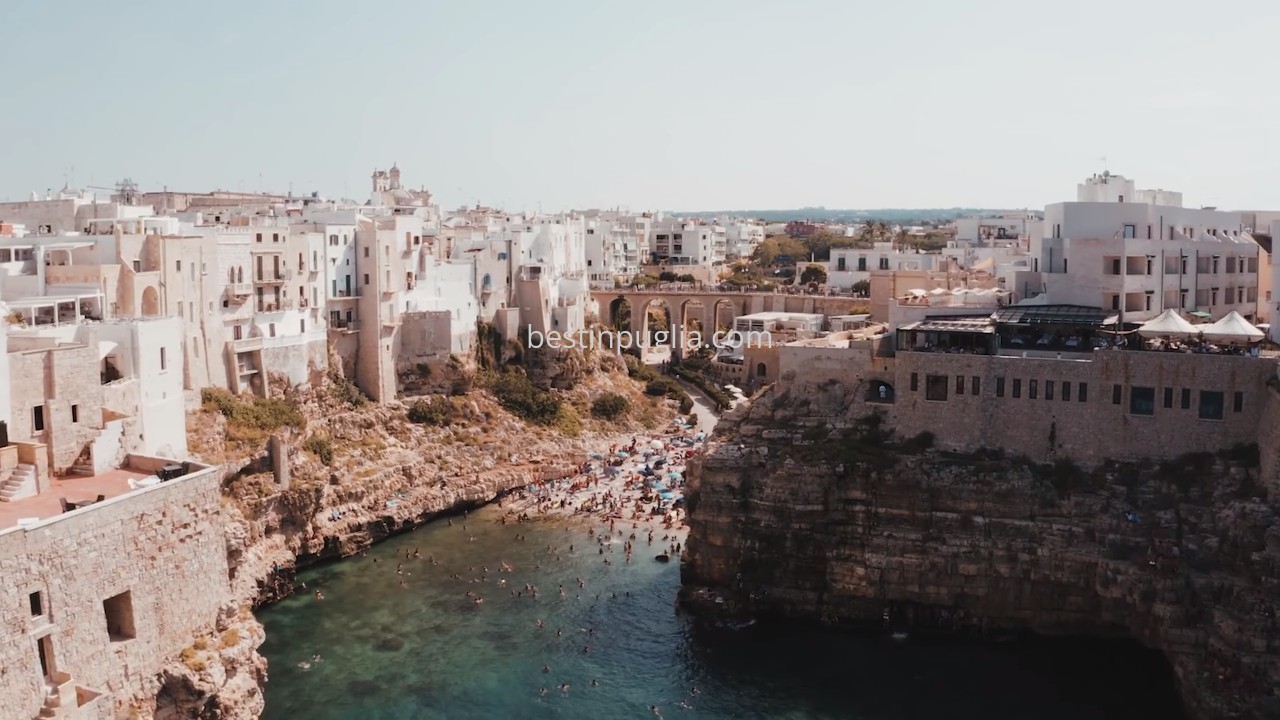 In Polignano a Mare the History, the Tradition, the Sea and the Breathtaking Landscapes accompany visitors during the exploration of one of the most evocative maritime territories of Puglia. The ancient city of Polignano a Mare stands on a spur of rock suspended 20 meters overhanging the sea.

Both in the city center and in the surrounding area you will find some of the most beautiful beaches in the world. The historic center is adorned with marvelous stone houses distributed along a labyrinth of narrow streets that end on marvelous terraces overlooking the sea.

These Adriatic coasts are bathed by clear and crystalline waters. The beauty of the place and the quality of the services offered have allowed Polignano a Mare to obtain the Blue Flag from 2008 to today. Although Puglia has a lot to offer, its beaches are certainly one of the major attractions. Precisely for this reason, we have decided to make a small guide on the best beaches of Polignano a Mare.

In the center of Polignano a Mare it is practically impossible not to notice the wonderful beach of Cala Porto. Cala Porto is characterized by the breathtaking view, the white pebble beach, the crystal clear water and the rocky seabed. Cala di Porto beach is immediately outside the walls of the historic center and can be reached by crossing a Roman bridge which corresponds to the ancient Via Traiana. From one of the sides of the bridge it is possible to descend the stairs to the base of the Lama allowing you to walk to the nearby beach. Lama Monachile gives its name to both the Roman bridge and the beach and is surrounded by the high rocks on which the historic center of Polignano stands.

Cala Paura is a beach located about 1.5 km from the historic center of Polignano a Mare. Even today it is a corner of the coast that is not very crowded and little known by tourists. The beach is made up of several rocky inlets and the sea can be reached from the rocks and various wooden platforms. The coast of Cala Paura is made up of several rocky inlets with a rocky bottom that becomes deep very quickly. On the beach of Cala Paura it is a lot of fun to dive, snorkel and dive from the rocks. Cala Paura beach is one of the beaches used by the locals and it is easy to find families with everything you need for lunch by the sea or groups of young people. The place is very charming and romantic but access to the beach is not very easy due to the stone steps that must be descended.

Porto Cavallo beach is a free beach about 3 km from the center of Polignano a Mare. The beach consists of a small sandy stretch and a larger part made up of rocks and rocks. The seabed near the beach is sandy and shallow but immediately becomes deep as you move away from the shore. The beach is ideal on the windiest days as it is well sheltered. To reach Porto Cavallo you need to walk along a narrow and bumpy path.

Porto Contessa beach is located in Polignano a Mare near the village of San Vito. Being close to the road to San Vito, it has very easy access from the road.
The free beach is made up of numerous sandy coves that alternate with more extensive strips of rocky coast. The water is transparent and the seabed is visible even many meters high.

The beach of San Vito is located near the village of San Vito, not far from the Abbey from which it takes its name. From the beach you can admire the abbey, located on a very high rock ridge, and a Saracen tower. The beach is wide and mostly rocky. The seabed is rocky and shallow near the coast but immediately becomes deep moving away from the coast. The beach is accessible, and easily reachable from the road, thanks to the special wooden walkway.

San Giovanni beach is among the most suggestive beaches of Polignano. It can be reached by crossing a very luxuriant pine forest that extends to the beach. The beach is of fine golden sand that dips slightly into a transparent sea. There are many spaces to cool off during the hottest hours of sunshine in the large pine forest or in the shade of the natural caves dug into the rock close to the sea. The spaces are dominated by a very well-kept bathing establishment with numerous day and evening services, with bars and restaurants, as well as a wonderful service on the beach.

Cala Fetente beach is one of the most beautiful coves on the coast of Polignano a Mare. Cala Fetente has a beach of fine clear sand with crystal clear waters, perfect for practicing water sports. The beach of Cala Fetente is particularly suitable for children, having a shallow seabed for many meters, and provides numerous services as it is partly managed by a private beach.

The free beach of Cala di Pozzo Vivo is a tiny beach set between two rock walls. The beach is made up of sand and rocks and is bathed by a sea that changes color from blue to blue, limpid and crystalline. The seabed is shallow near the beach but quickly becomes high as it moves away towards the open sea. The landscape is characteristic of the wild Apulian coasts of the Adriatic side. Being a little distant from the historic center, it is also unknown to many citizens of Polignano.

Cala Incine is a wonderful beach located in Polignano a Mare near Monopoli. The ideal is to visit during the week to avoid the crowds as the beach is very small and private.
Cala Incine is truly characteristic for the ancient tradition of small fishermen still present on the spot. In fact, it is possible to admire the colorful boats of local fishermen and the warehouses dug into the rock near the sea that can be visited.

Pietragea Beach is one of the most characteristic beaches of Polignano a Mare. During the day it offers a splendid expanse of light sand with shallow waters and crystal clear sea in which to spend a pleasant day at the beach. In the evening it becomes a meeting point for groups of people who like to spend their evenings on the beach. Families or groups of young people gather around the bonfires to spend the evening in joy and in total respect for the environment and nature.

7) Bay Of The Water Mill