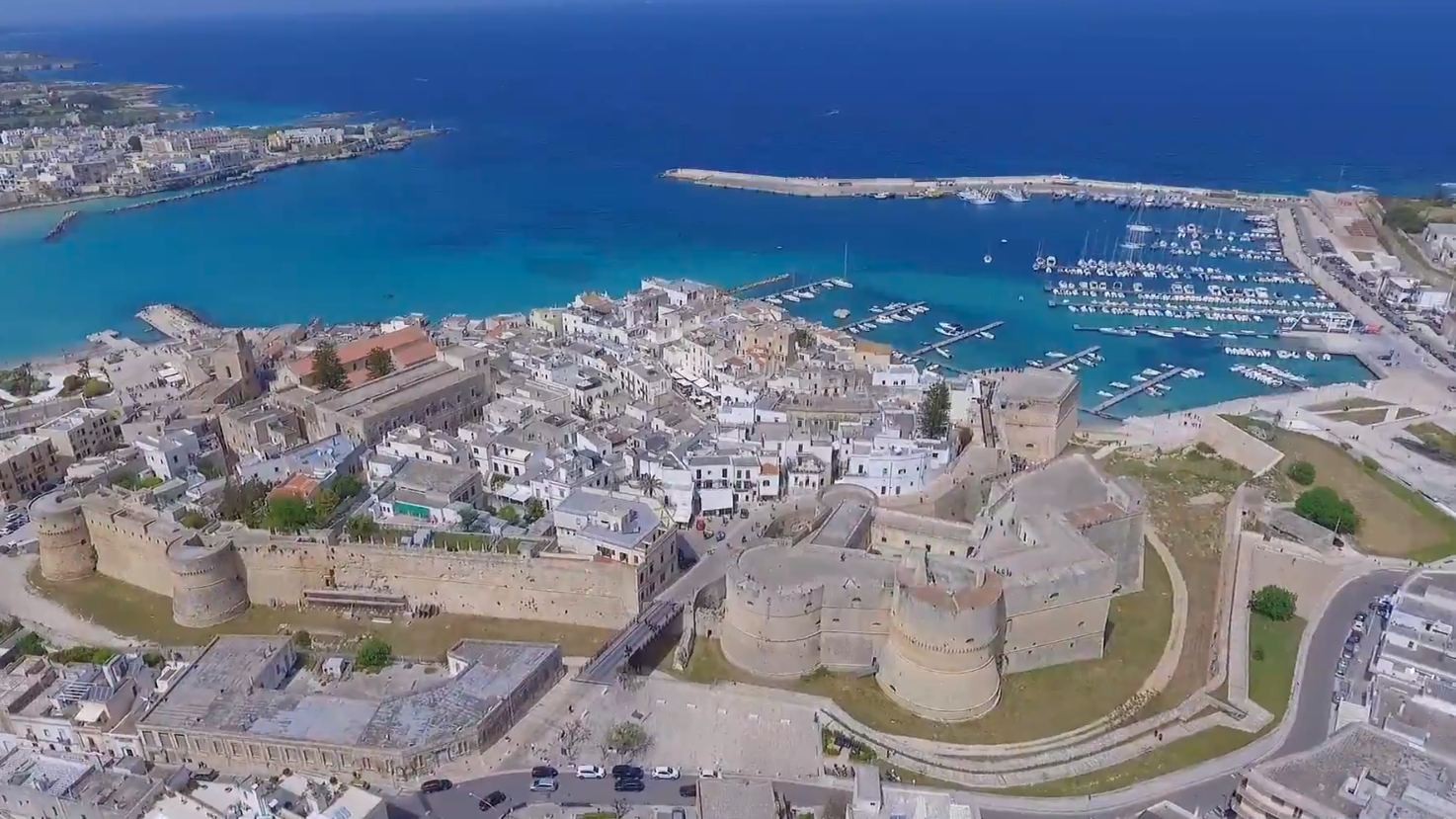 Otranto is the easternmost town of Puglia recognized in 2010 as a Unesco Cultural Heritage and represents an unmissable destination for travelers visiting Puglia and visiting the Salento area.

Otranto is a town of 5770 inhabitants in the province of Lecce overlooking the Adriatic Sea. Otranto is located in the most extreme part of the Salento peninsula and the southern part of the city, Punta Palascia, is the easternmost point of Puglia. The origins of Otranto date back to the Neolithic period but the modern city was established by the Messapians and subsequently developed under the dominion of the Romans, Byzantines and Aragonese to become the historical jewel it is today, immersed in an area rich in unspoiled nature with wonderful beaches. , transforming itself into a place that exudes history, art and culture.

Otranto is one of the most popular cities for tourists on holiday in Puglia and visiting Salento. In fact, Otranto manages to unite visitors who are passionate about nature and the sea, thanks to the unspoiled nature of the surrounding area, to travelers avid for history and culture, for the quality and richness of the historic center of Otranto, the numerous churches and fabulous farms. distributed in the surrounding countryside.

What to do in Otranto

Among the most beautiful things to see in Otranto are:

The jewel of the territory of Otranto is the city of Otranto itself with its impeccable promenade with incorporated beach, the remarkable historic center and the general well-being that a stay in the city infuses the visitor.

The center of Otranto is absolutely one of the main things to see if you are on holiday in Puglia and get to the bottom of the Salento area.

The city of Otranto develops around the imposing castle and the Norman cathedral which are in front of the port in the city center.

The main feature that strikes every tourist visiting Otranto is the agglomeration of buildings, intersected by alleys and streets, all gathered within the walls of the Castle.

With its almost 6000 inhabitants in winter, in summer its population multiplies thanks to the beauty of the places and the uniqueness of the sea.

It seems that the name derives from the Roman Idruntum, from the river Idrus, the current Idro that flows near the town.

Otranto is always very lively, even in the evening. Its restaurants are always very popular for their exquisite fish dishes.

The shops open until late display the most varied items with particular reference to ceramics and earthenware.

This jewel of Salento is a bridge between West and East, as demonstrated by the Byzantine Basilica of San Pietro and the ancient Cathedral.

The old city is accessed through the Porta Alfonsina, which together with the other towers of the castle and the walls, offers a fine example of military architecture resulting from the new fortification of the city built by the Aragonese after the Turkish devastation of 1480.

Walking through the streets of Otranto is an emotion that is rarely forgotten.

The alleys, the old houses and the ancient beauty of the historic center give it an incomparable charm, capable of capturing the heart and the gaze of every visitor.

One of the main attractions of the village is certainly the Aragonese Castle, in its initial configuration from the end of the 15th century.

The castle stands imposing in front of the port and is directly connected to the entire city walls, which must be crossed to enter the center both by sea and by land, with which it forms the ancient defenses of the city of Otranto from raids by sea.

Built at the behest of Ferdinando Primo di Aragona after 1480, the year of the destruction of the city by the Ottomans, its purpose was precisely to stem the threat of raids and raids by enemies by sea such as the fearsome Turks.

Cathedral of the Annunziata

The visit to the Cathedral of the Annunziata is absolutely not to be missed for the construction of the Norman era and to be able to admire its famous mosaic of medieval mosaic art.

The mosaic covers almost the entire floor of the basilica, depicting a large tree with the base at the entrance to the church and the development of the trunk and branches towards the presbytery.

Otranto is famous for its wonderful coastline, about 25 km long, which alternates sandy stretches with rocky stretches overlooking the sea with crystal clear water.

The coastal area of Otranto is characterized by the typical Mediterranean scrub that embraces the beaches and rocky stretches overlooking the sea.

Bay of the Turks

Among the most beautiful beaches near Otranto we recommend a visit to the wonderful Baia dei Turchi, with the Mediterranean scrub that surrounds the beach enclosed between two spectacular rock ridges.

On the long beach of Baia dei Turchi you will find spaces of free beaches alternating with shores with the necessary services to be able to spend a pleasant day on the beach.

Bay of the Water Mill

Another wonderful beach in Otranto Baia del Mulino d’acqua ( Bay of the Water Mill ), where you can also enjoy a visit by boat to the nearby Grotta Sfondata.

On the coast of Otranto, moreover, you can see numerous coastal towers that rise between the different beaches, built in the sixteenth century by Charles V to defend the territory from the Saracens.

The coastal towers present on the coast of Otranto are:

For a long time the port of Otranto was the departure and arrival station for ferries to nearby Greece or Albania.

Today it offers numerous services for the mooring of boats and for maritime activities.

The history of Otranto has always been linked to the sea, to which it owes its development and its importance.

Thanks to the sea, the village has over the centuries been the scene of landings, trade and commerce based mainly on fishing and trade by sea, before tourism occupied a primary position in the economy of the city of Otranto.

Things to see in Otranto

A little south of Otranto, near the Baia delle Orte, is the naturalistic area of ​​the former bauxite quarry.

The area has been subject to naturalistic restrictions since the 70s following the disposal of the quarry and the will of the citizens to allow nature to take over.

The quarry is famous for the emerald green lake, born in the center of the quarry due to infiltration from an underlying water table.

The arid and almost alien territory inside the walls of the quarry is completely transformed immediately around the emerald green lake, which strongly contrasts with the red of the rocky walls of the quarry, making it a unique place immersed in the Mediterranean scrub just a few steps from the sea.

If you are in Otranto and you want to spend time in one of the most authentic places of the Salento tradition then we recommend that you visit the Masserie located in the countryside of the city.

The farms are structures built in ancient times to protect the landowners, with his entourage of servants and guards, and workers.

Today they have been restored to their former glory after being converted into wellness centers, rented farms, lodgings, farmhouses, restaurants or b & bs.

Some of the farms naturally offer hospitality to travelers in the form of accommodation but also a restaurant, bar or farmhouse and therefore it is possible to taste all the traditional goodness of the typical Apulian cuisine.

To better enjoy your holiday in Puglia it is advisable to find accommodation or rent one of the many Masserie in Otranto.

Some of the farms are directly near the sea, a few tens of meters, others are located up to a few kilometers inland but all are more than adequate to accommodate visitors looking for beauty, quiet and relaxation in the Salento style.

How to get to Otranto

How to get to Otranto By car

Otranto can be reached by car both from the coast road from Brindisi and from the interior from the various towns of the Salento area.

Once you have arrived on the edge of Otranto, you can then park near the historic center in the rest areas and public pay parking lots.

In the center of Otranto, non-residents are prohibited from circulating by car and it is advisable to park outside the center and continue on foot for a few minutes.

How to get to Otranto By train

If you travel to Puglia by train you will see that it is possible to reach Otranto by train from Lecce.

The Otranto station is the last railway station in Salento, so to reach it there is only the railway line from Lecce.

From the station you can then take a local bus or walk for about 10 minutes to get to the historic center.

How to get to Otranto By bus

From the stations of Bari, Brindisi and Lecce numerous buses leave for the city of Otranto and the choice for travelers is varied.

There are regional public service buses that allow you to travel to Otranto with a few euros, with the disadvantage of having to make all the intermediate stops to your destination.

Then there are tourist buses that go directly to Otranto, which in summer depart at regular times, but whose ticket costs higher than public buses.

How to get to Otranto by plane

Otranto can be reached arriving at Brindisi airport, which is 73 km from the center of Otranto.

Once landed in Brindisi it is necessary to travel for 1 hour by car, passing through Lecce, to reach Otranto.

For visitors who intend to take a holiday in Otranto arriving by plane, we recommend renting a car or taking advantage of the transport services with driver available at the airport, in order to arrive in Otranto in a very short time and at affordable prices.

Discover Baia dei Turchi, one of the most beautiful beaches in Otranto