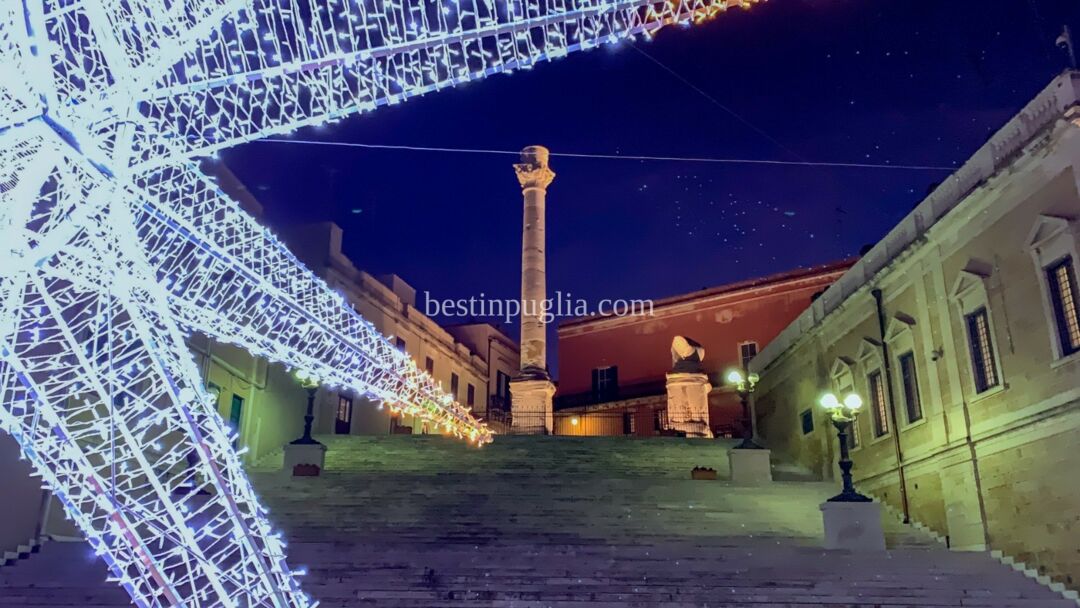 If you are wondering what to do on New Year's Eve 2022 2023, you could consider spending the New Year among the most beautiful cities in Puglia.

For the new year 2023 in Puglia numerous traveling events and shows are planned in the squares of the various municipalities.

If you decide to spend your New Year in Puglia you will have fantastic memories. In the period of December, Puglia is dressed in magic and colors, and becomes, as in summer, one of the most popular destinations for the New Year.

We advise you to choose your dates now and book as soon as possible, hotels and hotels are sold out in a very short time.

In all the main cities, as well as in many towns in the different provinces, it is possible to spend the New Year's Eve in Puglia outdoors and toast the New Year in public.

In many cities it is possible to find live concerts and outdoor shows of all kinds , with musical guests or bands of national and international caliber.

For those who want to spend the New Year indoors in Puglia, there is no shortage of alternatives such as restaurants, farms and relais. These structures offer, for the night of December 31st, the dinner service with Menu already prepared for New Year's Eve .

The New Year's Eve dinner in Puglia is usually one of the favorite ways for families, groups of friends or couples to spend the evening of New Year's Eve up to toast together at midnight.

What to do on New Year's Eve in Lecce

The main public event for New Year's Eve in Lecce, as for several years on New Year's Eve, is the New Year's Concert in Lecce which takes place in the center of Piazza Sant'Oronzo.

Thousands of Leccesi, as well as tourists from all over Italy and abroad, flock to the Salento capital to spend the evening among the many clubs in the historic center and to toast together in the square for the new year in a festive atmosphere and of music.

The historic center of Lecce is festively decorated throughout the period from Christmas to New Year.

You will be able to stroll among lights, shops and restaurants. If you decide to book a stay in Lecce, you will have a wide choice of B & Bs, hotels, hotels and various accommodation facilities.

Usually in the various squares you will be able to attend different shows with live music.

The best way to celebrate New Year's Eve 2022/2023 is to go to Piazza Libertà (Bari's main square) and attend the New Year's Concert.

Like any other large city in Puglia, Bari will be visited by many tourists, Italians and foreigners, who will flock to the historic center to admire its architectural and artistic beauties.

Many stroll through the historic center (Bari Vecchia) to visit the many shops open and to take advantage of the delicacies of the many clubs, bars and restaurants that offer above all Mediterranean delicacies, with typical Bari or Apulian cuisine.

Was man an Silvester 2022/2023 in Tarent unternehmen kann

The official New Year's Concert, conceived and organized by the Municipality of Taranto, will be held on January 1st at 11:30 am at the Teatro Comunale Fusco.

The New Year's Concert will take place in collaboration with the "Taranto Opera Festival", whose orcestra of musicians from different realities will delight the audience with a very varied repertoire of classical music.

The orchestra will be accompanied by the Apulian soprano Francesca Ruospo, one of the most interesting voices of the Italian opera scene and winner of several national and international awards.

The night of San Silvesto in Brindisi offers, as in previous years, the end of year concert in Piazza Vittoria . The celebrations for New Year's Eve in Brindisi also include a series of concerts and events in all the other squares of the historic center.

In all the cities of Puglia, the New Year is a very heartfelt event. The appointment with the great end-of-year dinner is not to be missed. All restaurants open on the evening of December 31 and you can book your dinner with a menu based on typical local products. Usually then you go out into the square to continue the celebrations.

On the morning of January 1, 2022 at 11 am (at "La Conca") on the north coast of Brindisi the famous New Year's Dive at the basin will be held, which now makes the city of Brindisi known around the world for one of the most eccentric ways to celebrate the start of the new year.

This is a non-profit event aimed at solidarity and with the collaboration of the Fire Brigade.

The dive is open to all interested parties, to all citizens, and to those who want to participate, to inaugurate the beginning of the new year by experiencing the thrill of a swim in the sea in the middle of winter.

On the evening of January 1st 2022 there will be the New Year's Concert at the Nuovo Teatro Verdi.

The last day of the year is the perfect opportunity to discover the beauty of southern Italy, with its artistic beauties, traditions, festivals and typical products.

Christmas in Puglia 2022 The best places for Christmas