Locorotondo, what to do and see in the ancient Locorotondo

Discover the ancient village of Locorotondo with its particular houses and its traditions immersed in an area of olive groves, vineyards and woods

Puglia - Bari - Things to do 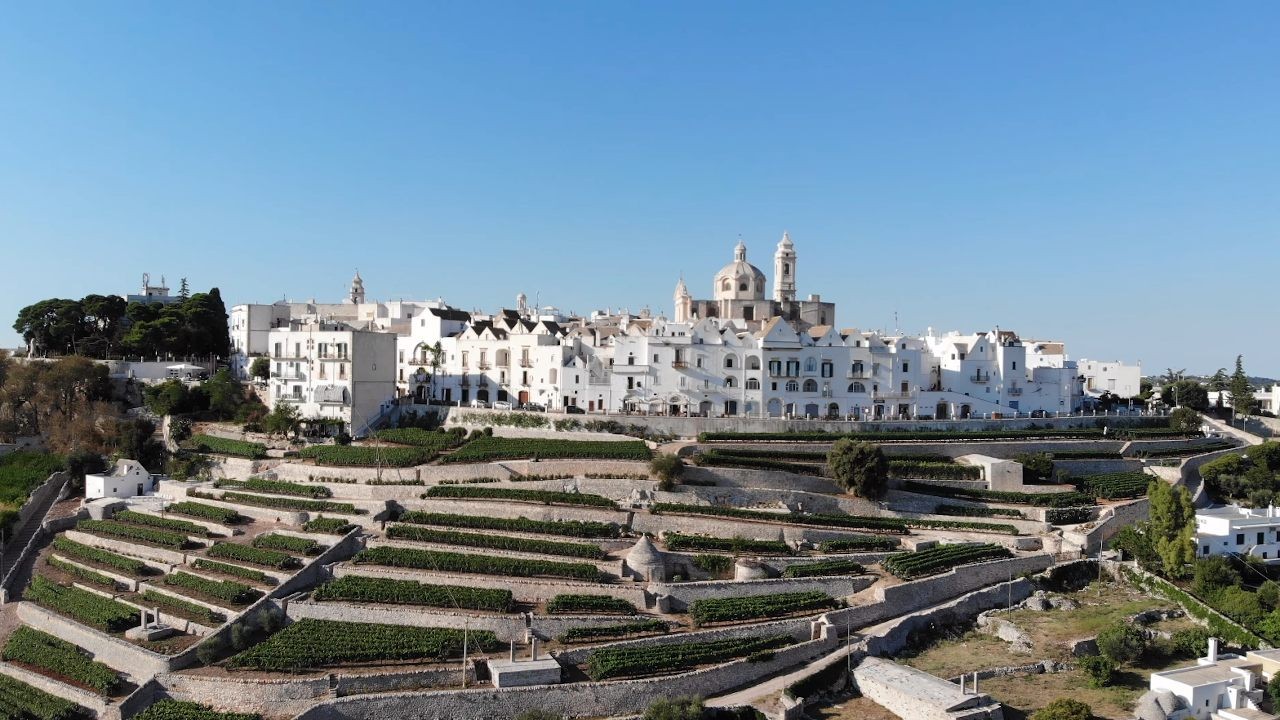 Locorotondo is one of the most enchanting villages in Italy and will fascinate you for its particular houses, for the ancient traditions and above all for all that the territory has to offer to visitors.

Locorotondo is a village of 13925 inhabitants located in the province of Bari in Puglia. The village of Locorotondo is located in the southern part of the Murge plateau, between the municipalities of Fasano and Ostuni. Locorotondo village is located at 410 meters above sea level on the top of the hill but the territory of Locorotondo has over 150 districts, hamlets or small agricultural communities. Each district has developed over the centuries around the various trulli, farms, churches, wells and squares scattered in the surrounding countryside, becoming a residence for various citizens. Visitors will not be disappointed by the timeless landscape.

Locorotondo is located in one of the most beautiful inland areas of the region, the Valle d'Itria or Murgia dei Trulli, whose economy, as is evident from the surrounding area, is traditionally agricultural but if it is transformed.

What to see in Locorotondo

Among the most beautiful things to see in Locorotondo are:

The name Locorotondo comes from the late Latin Locus Rutundus. Already in ancient times the village enclosed in the walls, due to its expansion towards the top of the hill, assumes that round shape which then gave it its name.

The town of Locorotondo had many names before the current one: initially it was called Casale San Giorgio in honor of the patron saint, then Casale Rotondo, later Luogorotondo and Locorotondo only in 1834.

The surrounding countryside is characterized by the massive presence of vineyards, about 15% of the territory's crops, olive groves, cereals, fruit crops and other crops that extend as far as the eye can see among wooded patches in the area.

The Villa Comunale is a park located on the side of a hill outside the walls, right in front of the spectacular Piazza Dante Alighieri.

The hill on which the Municipal Villa is located, called Monte Grappa, is an excellent place from which to enjoy the lush panorama of the Itria Valley

Palazzo Morelli is one of the most popular destinations for visitors for the remarkable example of Baroque architecture of the building.

The portal of the palace bears the noble coat of arms of the Morelli family, depicted in an elephant that supports a tower, and is surrounded by sculptures, works and precious architecture of Baroque art.

Balconies, balustrades, mirrors, arches enriched with moldings and masks with a mocking grin enrich the facade and the entrance hall of the building.

Internally the building was structured on 3 levels, accessible from the staircase located in the entrance hall. The basement is housed in a space with traditional barrel vaults. The first floor was instead dedicated to the lodgings of the nobility of the time. The second and last floor, with the lower barrel vaults, was dedicated to the warehouses.

All the Baroque art of the building and of the interiors is available to the visitor who wants to travel in time in the Apulian Baroque art.

The old town hall, dominated by the Civic Tower, in the center dates back to the 18th century. Today it houses the Civic Library but once it housed the municipal hall and a university.

The structure was subsequently modified to such an extent, with the enlargement of the building to occupy part of Via Maggiore, in the stretch that led from Porta Napoli to the Mother Church.

The Civic Tower was then added which included the clock removed from the bell tower of the Mother Church, which was subsequently modified in 1820 by erecting a circular structure formed by parts coming from the already disused bell tower of the church.

Today the spacious rooms of the building, open to visitors, house the Archaeological Documentation Center and the Historical Archive of Locorotondo.

The Trullo Marziolla is the oldest documented trullo in the whole Valle d'Itria (the Valley of the Trulli) and dates back to 1559 as reported on the entrance door of the trullo.

As the name suggests, the trullo is located in Contrada Marziolla, in Locorotondo, an area quite rich in vineyards.

The structure consists of a trullo, a rural construction typical of the Itria Valley built with local dry stones, with a domed roof that rises over 5 meters in height.

From the press inside, with basins and channels capable of conveying the must in cisterns, and from the stone wine press (the millstone) located outside, it is clear that the trullo was probably commonly used for the tightening of grapes from all farmers who worked the vines around them.

Visiting the Trullo Marziolla is the best way to discover the peasant origins of the city of Locorotondo and to fully understand the culture and traditions.

The visit of the historic center of Locorotondo starts from Piazza Vittorio Emanuele where, crossing the two large pillars of Porta Napoli, it is possible to follow a path that accompanies the visitor through the points of interest within the walls.

Walking through the historic center of Locorotondo it is possible to admire the ancient town hall building, today the municipal library, the baroque Palazzo Morelli with its splendid portal.

Just look out on the panoramic terrace in the center of Locorotondo to let your gaze wander over the entire Valle d'Itria in a mixture of scattered trulli and ancient farms, immersed in cultivated fields, olive groves and vineyards.

In the center of Locorotondo, from its viewpoint in Via Nardelli, you can admire the surrounding area made up of small vineyards, patches of wood and olive groves that extend as far as the eye can see in the Itria Valley.

In the historic center you can feel the care of the community because everything is graceful and intimate, transmitting a sense of order, respect and mature civilization.

The ancient heart is enclosed in its circular stone perfection that makes it assume, seen from the outside, the shape similar to a cake.

In Locorotondo The white of the lime envelops everything, acting as a dazzling background to the baroque architecture in local stone and enhancing the flowered wrought iron balconies.

Also for this reason, the historic center of Locorotondo won the Apulian municipality the orange flag of the Italian Touring Club.

Cummerse, the characteristic houses of Locorotondo

The peculiarity of the village of Locorotondo are the "Cummerse", small characteristic whitewashed houses with a sloping roof paved in black limestone, the chiancarelle, which, due to the extremely sloping shape of the roof, are reminiscent of the houses of northern Europe.

The Cummerse, together with the Trulli, are typical of the central town of Locorotondo and unique in the world of their kind.

Also thanks to this peculiarity, the ancient heart of Locorotondo is a unique place able to exert suggestions and charm out of the ordinary.

Things to do in Locorotondo

Among the most beautiful things to do in Locorotondo are:

Locorotondo is one of the villages of the Itria Valley where you can enjoy the Mediterranean views and the surrounding landscape by walking quietly through the alleys of the historic center, jealously guarded by its inhabitants without any trace of neglect or decay.

The locations are so unique that they have hosted numerous film shoots of both Italian and international production.

You will be amazed by the beauty of the views and the serenity that naturalistic environments transmit.

Locorotondo is a destination for travelers and tourists throughout the year.

In summer the town of Locorotondo, together with the surrounding farms and trulli, becomes a refuge for tourists who want to experience a holiday away from the daily frenzy. Locorotondo becomes an idyllic place where you can relax and recharge, immersed in a timeless territory.

Staying in Locorotondo in the summer allows tourists to enjoy the fresh hilly air of the Itria Valley during the sultry summer days.

Going to the beach when you stay in Locorotondo is really easy and is a favorite activity during the hot summer days.

Spending the warm summer evenings on the hills of the Itria Valley, between the stone walls of the buildings, means a lot in terms of livability thanks to the hilly summer evening coolness.

The sea is just 15 km away and there are some of the most beautiful stretches of the Adriatic coast, with much of the coast under protection for decades.

The seaside place in front of Locorotondo is Torre Canne and a little further south is the wonderful Regional Natural Park of Dune Costiere, enclosed between Torre Canne and Torre San Leonardo.

If you want to spend a hot day at the beach then just travel 15 kilometers by car to find yourself on some of the most beautiful beaches and nature reserves on the Apulian Adriatic coast.

In winter the town of Locorotondo is covered with lights to shine during the Christmas period in the eyes of numerous visitors from all over the world.

The Christmas atmosphere in Locorotondo is really particular for the whiteness of its characteristic streets and for the unique traditional houses with sloping roofs, typical of the Nordic countries.

Events are organized annually that attract visitors for Christmas in Locorotondo to admire for example the Living Nativity, the Christmas Markets, the Festivals and other events that take place from the beginning of December until the day of the Befana which is January 6.

Staying in a Trullo or in a Masseria in Locorotondo when it is whitened by winter snow is for those who stay there a truly unique experience thanks to the fairytale atmosphere in which you are immersed, with ancient structures in stone and wood with a unique shape.

Being in Locorotondo when it is whitened by snow is an experience that many visitors do not fail to be present every year.

Valle d'Itria is one of the most beautiful places in Puglia for its luxuriant territory, rich in woods and game, for its wild landscapes and for the typical hilly Mediterranean nature.

Another unique feature of the Itria Valley in the world is how man has entered this territory, building wonderful villages with characteristic stone houses painted in white lime but above all for the massive presence, unique in the world, of ancient stone Trulli. and farms.

In the vicinity of Locorotondo, a few kilometers away, you will find Cisternino with its splendid countryside and Martina Franca with its marvelous baroque buildings and its summer music festival.

Recensioni su Locorotondo, what to do and see in the ancient Locorotondo

Ostuni, what to do and see in the white city

Discover the ancient village of Ostuni for its white walls, its sea view, its ancient culture and its agricultural traditions

Porto Ghiacciolo – among the beaches to visit in Monopoli (Bari)

Among the most beautiful beaches in the Bari area, precisely in Monopoli we undoubtedly find Porto Ghiacciolo.

The most beautiful beaches of Monopoli

Monopoli beaches: find out which are the most beautiful beaches in Monopoli (with photos and videos)