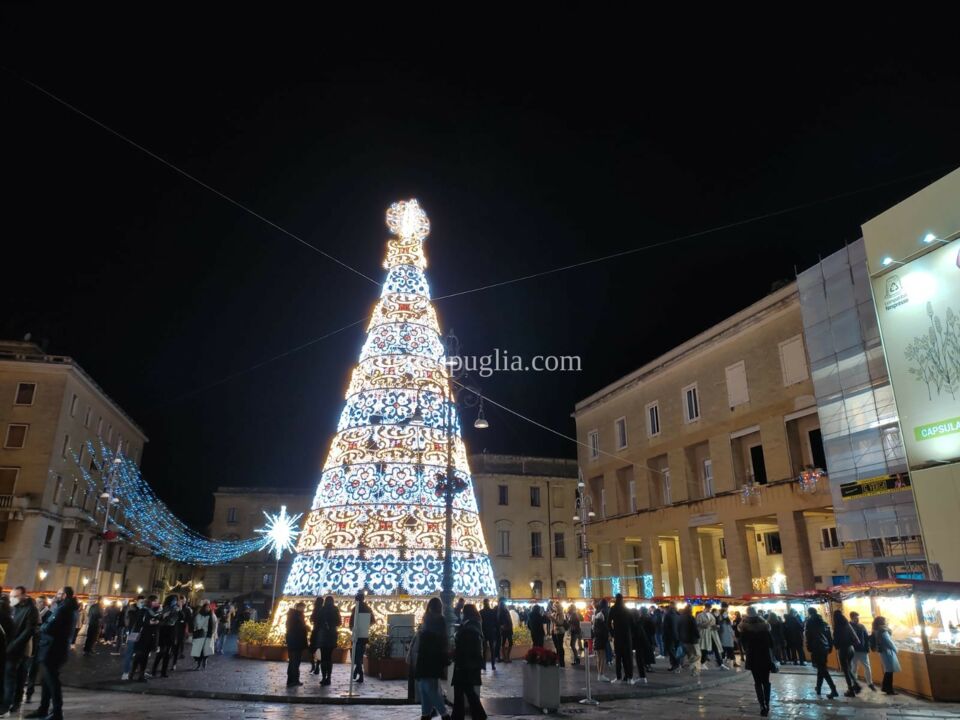 Christmas markets in Lecce on 2022 and other Christmas events in Lecce will take place from 7 December 2022 to 6 January 2022 in Piazza Mazzini in Lecce. Among the proposed initiatives it is possible to find the Christmas markets and Lecce and the Santa Lucia Fair, also known as the Puppet Fair. From 7 December 2022 to 12 December 2022 the consolidated appointment with the chocolate festival to be held in Piazza Sant'Oronzo where it will be possible to buy pretty decorations made of chocolate from master chocolatiers from all over Italy. In Piazza Duomo there is the characteristic Salento artistic nativity scene.

Christmas markets in Lecce for Christmas 2022

Here is the list of Christmas markets in Lecce and its province for Christmas 2022:

In the Christmas markets in Lecce you will find wonderful creations made with simple materials (for example hard stones) made by Salento artisans and traders. The Christmas markets of Lecce are the ideal place to find beautiful handmade gift ideas rigorously made in Salento. In Piazza Mazzini you will find the horse carousel for children. The large 20 meter high Christmas tree and the bright star will be lit, both located in Piazza Sant'Oronzo.

The traditional Fair of Santa Lucia, (also known as the Puppet Fair) is scheduled from 8 December 2022 to 22 December 2022 at the former convent of the Theatines in via Vittorio Emanuele II, in Lecce. The Puppet Fair is the typical Christmas craft fair that sees as protagonists the skilled craftsmen of papier-mâché and terracotta, called "Maestri Pupari".

Once the Fair of Santa Lucia was called "La Fiera di li Pupi" The Fiera dei Pupi has an ancient history in Lecce that starts from the mid-sixteenth century and has its roots in the popular traditions of Lecce. Giulio Cesare Infantino already talks about the Puppet Fair in 1634 in his work "Lecce Sacra".

Originally the fair took place for one day only, the day dedicated to Saint Lucia and took place near the ancient church of the same name which was demolished in the 60s.

Over time, between the end of the nineteenth century and the first half of the twentieth century, the Puppet Fair was extended until Christmas Eve.

The Puppet Fair is still a strongly felt tradition, it is the ideal place if you are looking for decorations and statuettes of papier-mâché or terracotta for your nativity scene.

Among the papier-mâché works, the variegated figures of the nativity scene stand out (not only the protagonists of the nativity but also shepherds, artisans, women intent on daily activities and more).

The papier-mâché works are also used as decorations and Christmas-themed creations perfect to enrich your home with touches of color and original works.

What are the dates of the Chocolate Festival in Lecce in 2022?

The traditional Chocolate Festival in Lecce also returns in December 2022 with some of the best master chocolatiers from all over Italy as protagonists. Christmas tree shaped tablets and any other shape and color. Chocolate for all tastes with strictly artisanal preparation with unique recipes and artistic creations.

Christmas Markets in the Province of Lecce [Updated 2022]

This year in Otranto, in the province of Lecce, the first edition of the "Luminarie Otranto festival" event will be held at the Aragonese Castle.
During the event, luminous works of art and many Christmas markets will be exhibited. Here you can find delicious local food, handcrafted creations and lots of live shows.
During the festival there will also be the 5th edition of "Zucchero & Cannella", which will allow you to participate in tastings in the historic center.

Here are the dates and times of the 2022 Christmas event in Otranto:

Admission costs 7 euros and also includes parking for the car.

Where to stay in Lecce?

The city of Lecce is able to accommodate many visitors both in the city center, among the precious historical monuments, or in the lush and calm surrounding countryside. Staying in Lecce during Christmas is ideal to be able to breathe the romantic atmosphere of the city, the baroque churches, the Roman remains, the museums, the Christmas events and to be able to taste the numerous gastronomic delicacies produced in the surroundings.

In the specific link that collects the best offers you can find:

House At the sight of the Baroque

In the historic center of Lecce, for your stay, Dimora Biancodoro welcomes you. You will find in the vicinity of the holiday home all the events organized for the Christmas period, with restaurants, bars and clubs just below the house. The house is equipped with air conditioning, one bedroom, TV and kitchen. Bed linen and towels are available upon your arrival. Alberobello is only 8 km away, Monopoli 22 km, Polignano a Mare 28 km and Brindisi airport is about 50 km away.

Palazzo Forleo offers luxurious apartments to guests who want to stay in the historic center, a few steps from Piazza Sant'Oronzo in Lecce. Palazzo Forleo welcomes guests in the center of Lecce with a bicycle service and free Wi-Fi, a garden in which to enjoy some peace and relaxation, room service for those who want to get away in their own apartment. The apartments have a balcony overlooking the streets of the center, air conditioning, TV, full private bathroom, seating area and dining area. Palazzo Forleo offers all guests to use the rooftop terrace of the building with lounge and city view. Nearby you can visit Piazza Mazzini, the Cathedral and the Lecce railway station. Brindisi-Salento Airport is 45 km from the property, reachable by an airport shuttle service on request.

The Isola Dello Stampatore B&B is in the historic center of Lecce in an ancient building with exposed stone vaults and free Wi-Fi. The cathedral of Lecce is only 500 m away and it is very easy to move on foot to visit the most beautiful attractions in the Baroque city. The guest accommodations are air-conditioned studios with a fully equipped kitchen with a fridge, a seating area with a sofa, a flat-screen TV and a private bathroom with bidet and a hairdryer. Guests receive a welcome basket with breakfast consisting of sweet products and drinks. The arch of Porta Napoli is 100 meters away and in 10 minutes on foot you can reach the Roman Amphitheater. The B&B is only 1 km from Lecce Central Station.

In the heart of the historic center of Lecce, with a balcony overlooking Piazza Sant'Oronzo and the Roman amphitheater, the "La Finestra sul Vicolo" suites welcome you. Suites are accommodations with free Wi-Fi and private seating areas. Each suite is equipped with air conditioning, TV, living room with sofa, equipped kitchenette, dining area and private bathroom complete with courtesy accessories. Each suite is also equipped with a dishwasher, refrigerator, oven, kettle and coffee maker. The nearest airport is in Brindisi, about 50 km away.

About 5 km from the historic center of Lecce, Masseria La Lizza welcomes you with the typical rural hospitality of Salento. The masseria is also a farm that produces seasonal vegetables and olive oil, which allows guests to enjoy the typical fresh products produced on site. The gastronomic service and the large garden are the main features of this ancient rural structure perfectly restored and equipped with every comfort. Guest rooms are air conditioned and have garden views. The sea is only 7 km from the farm with the beach of Torre Chianca or San Cataldo, easily reachable by car in a few minutes.

Masseria Lilei welcomes guests 9 km from the historic center of Lecce, in the warm and lush countryside of Salento. The structure consists of a completely renovated historic farmhouse that operates as a farmhouse, producing fresh vegetables, fruit, oil and wine following traditional methods. The farm also hosts visitors from all over the world who are welcomed with a restaurant, a seasonal outdoor swimming pool, a bar and a shared lounge. The farmhouse offers private parking and free Wi-Fi, a large garden and a sun terrace. The accommodations are equipped with TV, private bathroom with everything you need, lounge or balcony. A continental breakfast is served every morning. Brindisi airport is about 50 km away and can be reached on request with the shuttle available to the farm.