The 5 most beautiful Carnival parties in Puglia. A fusion of tradition and modernity with spectacular floats and colorful masks 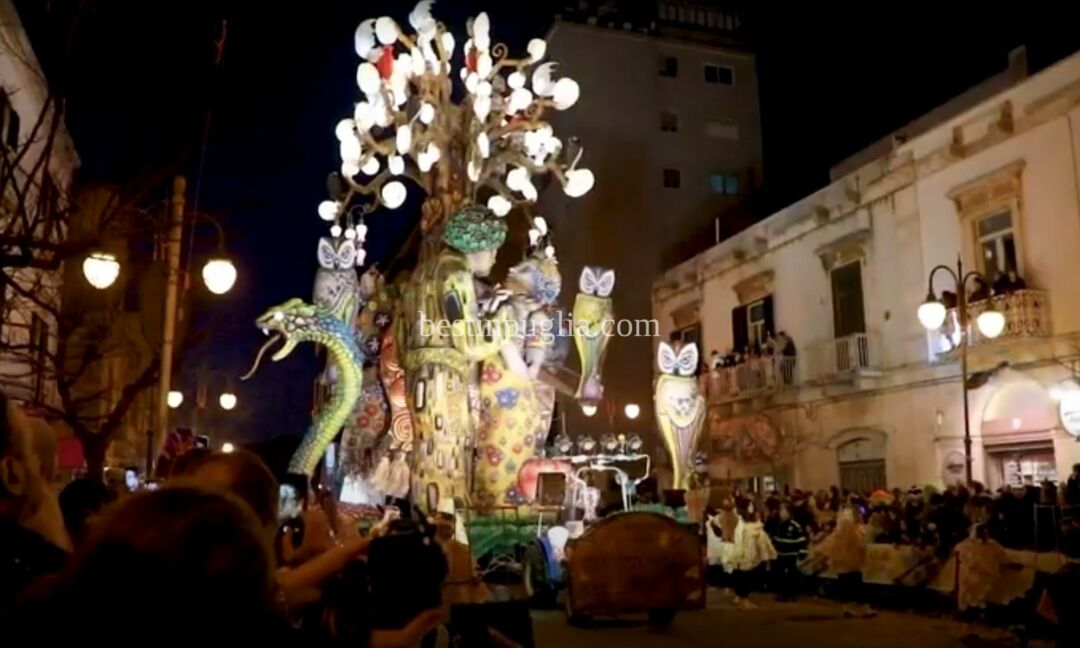 Carnival in Puglia is one of the events most experienced by citizens and tourists.

Carnival events in Puglia blend together masks, allegorical floats, parades and typical recipes. Going to Carnival in Puglia means taking part in memorable celebrations and banquets all very attended by the population and by many visitors.

Where to celebrate Carnival in Puglia 2022

There are many cities in Puglia that organize large Carnival parties that are worth visiting (for beauty, tradition, special celebrations and number of visitors). Given the long period of the celebrations, it is possible to visit several Carnival parties in the same year.

These are the cities with the best Carnival parties in Puglia:

Carnival in Puglia: origins and peculiarities

Carnival is a celebration linked to the Catholic and Christian world but has much more ancient roots .

It is a period that goes between Epiphany and Lent (in particular the Thursday, Sunday and Tuesday before Ash Day) in which unbridled behavior and entertainment accompanied by traditional and folkloristic events are allowed.

Already in Roman times there were similar celebrations but the first manifestations of the modern carnival take place around the year 1300.

Carnival is historically known for eating typical sweets prepared during this period (Frappe, Castagnole, Zeppole and many others) but above all for the reckless celebrations in which hierarchies and social obligations were canceled in order to allow excessive behavior and customs (otherwise sanctioned) along with the tendency to joke.

Carnival in Puglia in Putignano

The Putignano Carnival is no of the oldest and most well-known events in the world and the most renowned Carnival in Puglia and throughout southern Italy.

Its official origin dates back to 1394 when the Order of the Knights of Malta decided to keep the remains of Santo Stefano in Putignano.

The arrival of the Saint's remains were celebrated by the population with processions, songs and dances, thus giving rise to the first carnival.

The feast officially begins on December 26th , the day of Boxing Day. with the lighting of the Votive Candle , to begin the period of absolution of the sins that are committed during the carnival period. Also on December 26th takes place the feast of the Propaggini , where dialect actors and poets revisit the past year in a satirical key.

The main attraction of the Putignano Carnival is the parade of allegorical floats set up with giant papier-mâché figures representing famous people. Everything is conceived and created by a group of papier-mâché masters who work for a whole year following traditional processing methods.

The party ends with the 365 tolls of the Macaroni Bell , at the end of which the periods of celebration, entertainment and large meals are put to an end to start the period of Lent.

Carnival in Puglia in Manfredonia

The Manfredonia Carnival has been officially present since the 1950s but it is, together with other Carnival celebrations in Puglia, a festival that has ancient origins and which makes it one of the best known and most popular carnivals in Puglia.

Despite the long period of celebration, 3 days are dedicated to parades (Shrove Thursday, Sunday and Shrove Tuesday) dominated by allegorical floats and masked groups.

These days the great parade (or Gran Parata) is made up of many masked groups and the "Parade of Wonders" in which numerous groups of students take part.

Carnival is something important for the citizens of Manfredonia, a tradition to which the population devotes time and care to offer an unforgettable show to anyone who wants to join the celebrations.

Carnival in Puglia in Massafra

The Massafra Carnival was born from a successful joke in 1951. A group of amateur dramatics actors from a Goldoni show wanted to organize a joke to awaken the town from its torpor and slow rhythms.

Word spread that a bullfight with bulls, matadors, picagores and banderilleros would be organized in the city center on Carnival Sunday.

The joke turned out well enough to upset not only the respectable citizens but also the authorities, worried about the consequences that a bullfight could have in the city center.

Despite the worries, many citizens gathered that afternoon waiting to be able to witness the frightening event together with the police.

The bullfight really took place but a papier-mâché bull appeared in the square, matadors on brooms and unarmed matadors.

The characters of the bullfight were all present but in a light-hearted and jester version.

Lo scherso did so well that since then a competition has arisen between the various groups that organize the Massafra carnival parade to be able to organize the largest or most beautiful floats, or the best joke or the funniest masks.

Carnival in Puglia in Gallipoli

The Carnival in Puglia in Gallipoli has medieval origins that traditionally combine pagan customs with pre-Christian rites.

The link between the sacred and the profane begins in mid-January with the rite of fire in which bonfires, the Focaredde, made up of intertwined olive branches and leaves, are lit in the city squares.

This is the propitiatory rite of fire, for the success of the carnival period, linked to the pagan myth of Prometheus and dedicated to the Christian patron of fire Sant'Antonio Abate.

In the past, the celebrations of the Gallipoli Carnival took place only in the streets of the ancient village, which was invaded by thousands of masks that prompted those present to laugh amid sarcastic jokes and confetti.

Only at the beginning of the twentieth century the Carnival began to take place in the streets of the new village.

The first major parade of allegorical and grotesque floats dates back to 1954 and has enjoyed ever-increasing success ever since.

The Gallipoli Carnival is considered today one of the most beautiful and well-known carnivals in Italy like the Viareggio Carnival, together with which it has been included in the limited circuit of national lotteries.

Carnival in Puglia in Aradeo

Aradeo is a small town in the province of Lecce where one of the most beautiful Carnival parties in Puglia has been organized for more than 30 years now.

The Aradeino Carnival is very popular with Apulian citizens thanks to the colorful allegorical floats and masked groups that parade through the beautiful historic center .

The greatest interest is in regard to the spectacular and colorful floats, made by craftsmen and papier-mache masters.

The party and the floats were also made known thanks to the passion and meticulous work of the organizers, until it became one of the most important Carnivals in Salento .

The period is the right one to taste typical sweets such as chiacchiere, pancakes, damselfish and pasticciotti from Lecce.

Carnival in Puglia in Mesagne

Mesagne is also among the different places in which to celebrate the carnival in Puglia.

The Mesagne carnival is one of the best known in the province of Brindisi and was born around the 18th century.

The two traditional masks of the Mesagne carnival are Gibergallo (a clown dressed in a black tailcoat) and Lu Pagghiuse (a somewhat peasant character who depicts the typical Apulian person who stirs briefly and immediately calms down).

In addition to the typical carnival masks, floats are set up in Mesagne thanks to the art of papier-mâché. In the last edition the floats reproduced the cartoon characters, so loved by children.

Attending the Carnival in Puglia in Mesagne is an incredible event thanks to the beauty of the masked parades and the beautiful themed floats, all accompanied by music and musical groups.

The dates of the 2022 carnival in Mesagne in Puglia are not yet known.

Other Carnival celebrations in Puglia:

Other Carnival parties in Puglia take place in :

Discover all the information about beaches, Holiday homes, Food and wine tours, Booking of guided tours and Luxury holidays in Puglia.

Don't miss our guides on the best destinations and offers. Discover the best beaches, guided tours and the best things to do in Puglia.