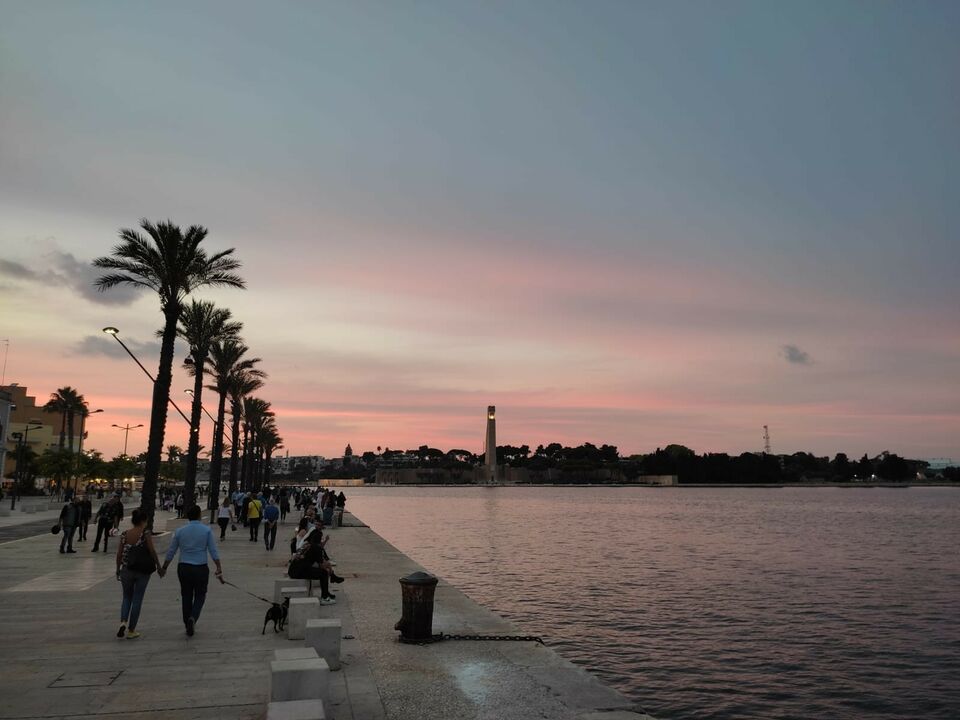 Brindisi is a provincial capital city of the Puglia region with a millenary tradition, therefore full of attractions and wonders in the open air. The whole province of Brindisi is scattered with sites and structures of historical importance, from the sea to the hinterland, which testify to the ancient commercial, military and transit vocation of the area.

Thanks to the presence of its huge natural port, the city of Brindisi has been a crossing point for sailors from all over the Mediterranean since ancient times, well before the Romans. This has allowed the city of Brindisi to initiate relationships and commercial exchanges since ancient times with different peoples, assimilating their culture, language and traditions, until it became a permanent home for some groups of these populations such as Greeks, Albanians, North Africans, Spaniards and still others.

Among the best things to do in Brindisi during a holiday there are certainly beautiful walks in the city center and along the seafront, seeing places and locals, hiking in the villages and historic centers, visiting archaeological sites, taking boat trips, swimming sun, beach activities, beach parties, village parties, festivals, musical concerts and much more, all accompanied by the good humor of the people of Brindisi and delicious local food.

Brindisi is one of the oldest and most populous cities in Salento, with its nearly one hundred thousand inhabitants. Thanks to these characteristics it is a province full of activities, things to do and see.

If you go out early in the morning on the streets of Brindisi you can get the best of the city in an environment with typical Mediterranean characteristics, between citizens busy with their daily lives and visitors looking for a place to enjoy breakfast to get ready for things. to do during the day.

What to do on holiday in Brindisi

To reach Brindisi, there are various direct bus solutions from the main cities of Italy, trains, cars or motorcycles (to discover the city in freedom) and national and international flights to Brindisi or Bari airport.

Brindisi airport (or Salento Airport) is certainly the most practical and fastest way to reach the city center from any part of Italy or from abroad.

Once you arrive in Brindisi you will see that there are many things to do and you will understand that a weekend will not be enough to enjoy all the things to see.

However it is possible, in a few days, to take a tour of the historic center to visit the city of Brindisi well and be able to see its main attractions.

The 5 things you absolutely must see if you are on holiday in Brindisi are:

Piazza Duomo and the Cathedral

Piazza Duomo is the oldest square in the city and is among the most beautiful things to see, from an architectural and historical point of view.

The palaces that surround the marvelous square are characterized by the evident signs of their medieval and Roman origins.

The Cathedral is among the medieval palaces found in Piazza Duomo in Brindisi and is also known to the people of Brindisi as the Basilica of the Visitation.

The port is the center between connections with Greece, Croatia, Albania, Turkey and the other main port cities of the Italian peninsula.

A characteristic of the port of Brindisi is the quality of the conservation of the historical and artistic heritage of which it is made.

Walking along Viale Regina Margherita you can walk along the pier of the tourist port, admire the Monument to the Sailor, the Forte a Mare castle, Virgil's staircase, the Roman Columns.

Along the way you can refresh yourself and enjoy by stopping in a bar, a pastry shop, an ice cream parlor or a restaurant that will certainly be able to exceed all expectations of the most sophisticated palates

Near the port of Brindisi, a few steps from the Duomo, you will find the two Roman Columns which represent the symbol of the city of Brindisi.

To date, only one of the two columns remains visible on the outside.

The other is kept a short distance away, in Palazzo Granafei Nervegna, where numerous Roman artifacts are kept, the original capital of the two ancient Roman columns and many other historical artifacts from different eras.

Unfortunately, the Roman Columns have suffered collapses and other damage over time, in fact in 1528 one collapsed under its own weight and collapsed while the other was instead destroyed by bombing in the Second World War and was subsequently rebuilt using the original capital.

In front of the columns you will have a wonderful view of the port and from here you can go down to the sea of ​​Viale Regina Margherita using the beautiful marble staircase called Scalinata di Virgilio, so called because the great poet Virgilio lived there and died.

The Torre Guaceto area is continuously monitored by the harbor master's office to ensure that bathing bans and the use of boats in the area are respected. In fact,

Torre Guaceto is included in the lists of protected areas and therefore it is necessary to pay attention to where you dive or how you behave with the local flora and fauna.

Torre Guaceto is part of the defensive system, consisting of many towers built along the Apulian coast, built by Charles V in the 16th century with the aim of protecting the Apulian coasts from attacks by Turkish marauders of the time on the Brindisi coast.

The towers no longer have a military function but have become suggestive elements of the coast, testimony of the history of Brindisi and Puglia, with areas open to the public both around the towers and on the beaches.

Torre Pozzelle is a natural oasis, a few kilometers from Brindisi, which takes its name from the tower built in the 16th century by the Spanish governors of the time.

The Tower was part of a system of towers built a few kilometers from each other in order to increase the guard service of the coastal areas near Brindisi, with sighting and communication tasks, to defend against the numerous attacks and looting sufferedb by the Turkish raiders at that time.

In fact, if you sharpen your eyes well. once you reach the foot of Torre Pozzelle, you will notice Torre Santa Sabina to the south and Torre Villanova to the north (these too can be easily reached and visited).

The advice, if you want to go to Torre Pozzelle, is to organize yourself with sneakers to walk in the middle of nature but also to have swimwear with you to be able to spend a wonderful day at the beach away from the city bustle and traffic.

Monument to the Sailor of Italy

Another symbol of the city, in addition to the Roman Columns, is the Monument to the Sailor of Italy.

It is a huge structure visible from any corner of the port of Brindisi and from most of the city.

The monument is shaped like a rudder, is 53 meters high, and was built in honor of all the sailors who fell during the First World War.

Today it is one of the most important tourist attractions of the city of Brindisi and it is also possible to climb to the top to have a beautiful view from above of the whole city and the coast.

It can be easily reached starting from the historic center, using the shuttle service by sea available to the public from the pier at the end of Viale Regina Margherita.

The Castle is also called the red castle due to the color of the stone used.

If you take a walk along the Corso in the center of Brindisi you cannot miss two of the most important squares in the city, Piazza Cairoli and Piazza della Vittoria.

You can walk a stone's throw from the sea in a setting of buildings with evidence of their medieval and baroque past.

In the vicinity of the Corso, the Verdi Theater is of particular interest.

Near the Verdi Theater, in the historic center of Brindisi, you will find the Palazzo Granafei Nervegna which is the seat that collects many ancient Roman finds of the area and houses one of the symbols of the city of Brindisi or the original capital of the Roman Column at the entrance. of the port of Brindisi.

What to see in the province of Brindisi

The whole province of Brindisi is full of ancient towns and villages, both inland and on the coast, all perfectly preserved and pleasant to visit. You can choose to divide the day between walks in the historic centers and sunbathing in pristine oases.

Or decide to walk in the hills in the unspoiled nature of Mediterranean woods or in the Itria Valley on the typical country roads, among the olive groves and vineyards divided by the characteristic dry-built walls in order to outline the properties and enclose the Trulli (i.e. the ancient rural stone houses in the area).

Visiting the province of Brindisi, its towns, its villages, the sea and its nature can only make you spend moments of pleasant relaxation, cultural satisfaction, hospitable people and lots of good food accompanied by local wine.

In the surroundings of Brindisi you can visit Ostuni. A sought-after tourist destination.

Now every year many tourists decide to spend their holidays in the city of Ostuni.

It is known as the white city for the coloring of the houses (with lime paint).

This feature gives the streets greater brightness. We advise you to stroll around the village. You will find many charming little streets.

Ostuni is full of clubs, souvenir shops and craft shops. You can book a tour in a gig that will make you discover the most beautiful corners of the city.

If you walk through the village you will see so much history and so much beauty.

Ostuni also offers some of the most beautiful beaches in Puglia.

In the surroundings of Brindisi you can visit Fasano. In the historic center you will find streets, white houses, squares and churches.

One of the most important attractions is the Dolmen di Montalbano. An archaeological site dating back to the Bronze Age.

This represents the first testimony of the cult of the dead. You will find the dolmen in Occhio Piccolo, on the road between Ostuni and Fasano.

The archaeological park of Egnazia is also of great importance. In more ancient times, ceramics were produced.

The abandonment of this area led to the subsequent foundation of Fasano.

If you want to spend a day full of fun, we recommend the Zoosafari. A place suitable for people of all ages.

It is definitely a place to visit if you are on holiday in Puglia. A beautiful attraction.

It is one of the largest wildlife parks in Europe, with more than two hundred species of animals.

You will be able to drive among the animals, like a real safari. In other areas you can walk.

These are just some of the places to visit in Brindisi and its surroundings.

Puglia is full of wonderful places to visit.

During your holiday in Puglia you will be able to see many tourist attractions.

Things to do - Brindisi

Ostuni, what to do and see in the white city

Things to do - Ostuni

Cisternino, what to do and see in Cisternino

Things to do - Cisternino

Fasano, What to do and see

Brindisi: what to see in a few hours

Things to do - Brindisi

Best Bed And Breakfast in Brindisi