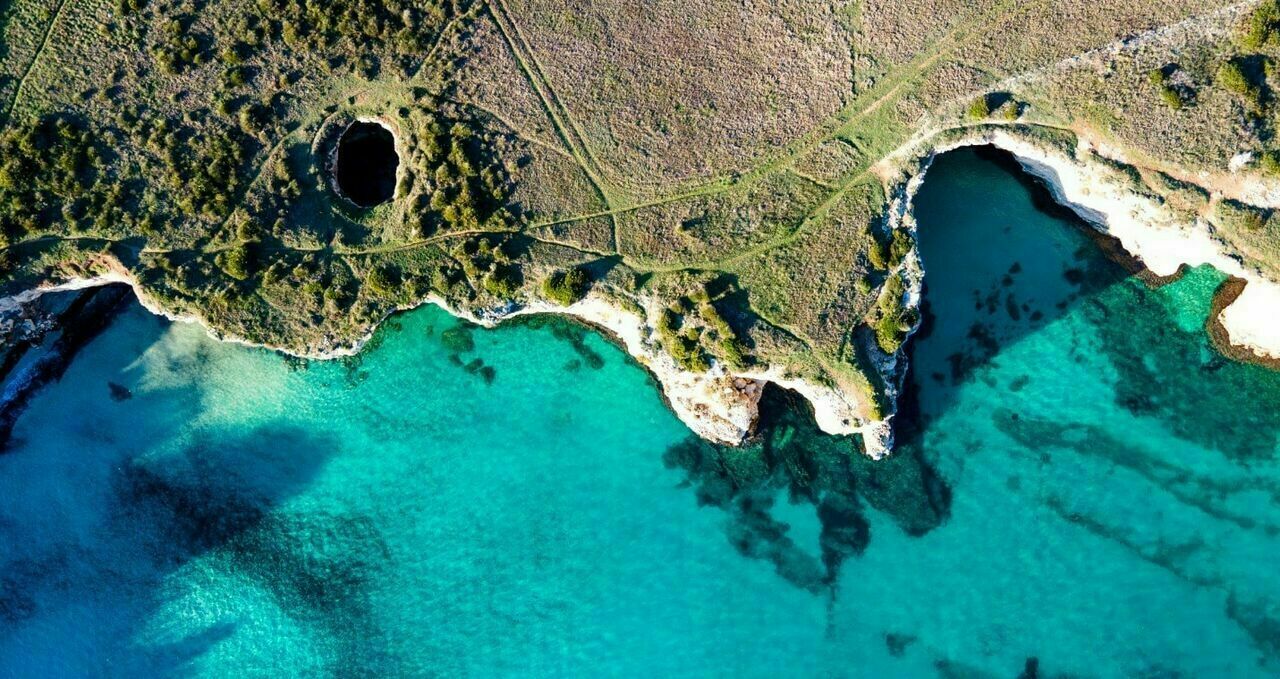 The Bay of the water mill (Baia del Mulino d'acqua) is unique in its kind, you will find a clear and clean clear sea, a real natural paradise. One feature is that it is surrounded by high cliffs overlooking the sea.

The Bay is located on the Adriatic side and is so called because in the past there was a mill that came into operation thanks to the action of water. In order for the mill to work, a closed place was needed where water converged and increased the power of movement; typical event of the caves.

Today there is no trace of this ancient mill, but you can see the presence of the caves.

From the beach you can reach:

The last two caves are connected inside by a channel that can be crossed by swimming.

While, the Grotta Sfondata Otranto, which is the closest to the beach, owes its name to a large chasm on the ceiling.

It is precisely this cave the most coveted point to take beautiful photos.

It is also possible to observe the landscape from above, along a path that starts from the Baia del Mulino and runs along it from above.

The Grotta Sfondata of Otranto is one of the main attractions of the tourist area of Baia del Mulinoacqua.

Although over time we have tried to keep the place secret, which precisely because of its beauty some wanted in this way to protect, at the time of social media and photography, the beauty of the Grotta Sfondata di Otranto soon became known and thousands of tourists every year, they swim starting from the beach of Santo Stefano, to reach and visit the beautiful Grotta Sfondata of Otranto.

How to reach the Grotta Sfondata Otranto

How to reach the Beach?

It's very simple. By car, arrived in Otranto you will have to take the SP33 road, arriving towards the junction of Via Vicinale Santo Stefano you will then find all the signs that will take you to this wonderful corner of paradise.

It is also possible to book excursions that start from the beautiful city of Otranto, exploring by boat the Otranto coast with its caves and the beach.

If you want to spend unforgettable holidays, we recommend one of the Masserie in Otranto, near Grotta Sfondata.

Discover Baia dei Turchi, one of the most beautiful beaches in Otranto

Villa in Puglia to rent find out the best solutions