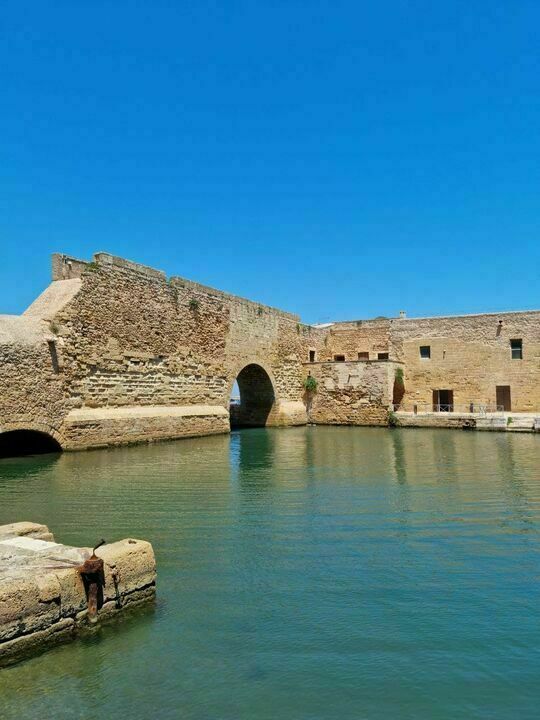 If you are planning your 2022 holiday in Puglia, and you want to visit and discover the city of Brindisi, the guided tour of the Alfonsino Castle is ideal for discovering a piece of Brindisi's history.

In this post you will be able to read useful information about the Alfonsino Castle in Brindisi, so you can organize your next holiday in Puglia.

The Alfonsino Castle of Brindisi is also known as Forte a Mare and was born on a small island called Isola di Sant’Andrea. More precisely, it is located at the entrance to the port of Brindisi.

The construction of the castle began in 1558, thanks to Philip II of Habsburg, and the works lasted 46 years.

Later the castle was enlarged by the Spaniards to defend itself from attacks by sea by the Turks and Venetians. The city of Brindisi thus became the main military garrison of the Kingdom. Alfonso I of Aragon decided to fortify the island of Sant’Andrea by building a castle and incorporating the remains of an existing Angevin structure.

The structure of the Alfonsino castle in Brindisi

The structure of the Alfonsino Brindisi castle has a trapezoidal plan with two pentagonal bastions and a circular tower.

Very characteristic is the internal port which can be accessed thanks to an open archivolt between the walls.

The structure consists of two hubs:

Both sides are preceded by a portal. The Fort area was commissioned by Philip II of Austria.

The interior of the Alfonsino Brindisi Castle

The environment of the Brindisi Castle is spread over two floors. It has a rectangular courtyard raised above sea level. From the courtyard you can reach the ground floor galleries via the flights of stairs.

Inside there is a hall decorated with a washbasin with stone jambs, dating back to 1527. The two bulwarks, one round and one triangular, date back to the 16th century.

Visit the Alfonsino Castle of Brindisi

In recent years, thanks to the works carried out by the Superintendency, the Castle has been reborn and has finally been reopened to the public. It is possible to book a guided tour to discover the wonder of this Castle with its history. Routes have been created that will allow you to visit the Alfonsino Brindisi Castle while respecting its historical characteristics. The Piazza d'Armi has been recovered and the internal and external walls have been restored. The structure has been enhanced thanks to reception, information and promotion services.

When to visit the Alfonsino Castle of Brindisi

The reservation for the guided tour of the Alfonsino Castle in Brindisi is mandatory and costs € 5.

Curiosities about the Alfonsino Castle of Brindisi

The Alfonsino Brindisi Castle was also called "Red Castle", characteristic of the vermilion color of the stone quarried in the same place where it was built.
The island of Sant’Andrea has a cone shape in which a Benedictine abbey is thought to have been included, the remains of which are kept inside the Archaeological Museum of Brindisi.
Over the course of history, the castle and fortress were attacked multiple times. Subsequently, thanks to the restoration works, they were used as a penal bath, as a lazaret and as a mine deposit during the Great War.

What are you waiting for? You too can visit the island of Sant’Andrea and its Alfonsino castle.