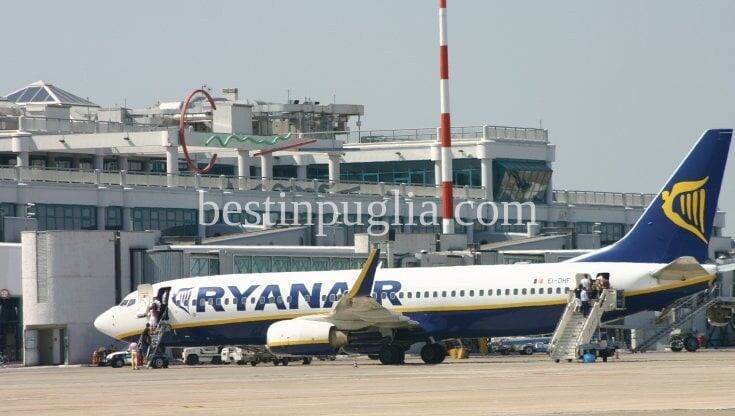 Puglia is one of the southernmost regions of Italy and is difficult to reach by land with traditional means. However it is well connected with the rest of Italy and with Europe thanks to the many flights to Bari Airport - Karol Wojtyła and Brindisi Airport (or Salento Airport- Papola Casale Airport). Every day thousands of passengers pass through the airports for Puglia.

How many airports in Puglia?

In Puglia there are 3 main airports: Bari, Brindisi and Foggia. Various airlines operate at the airports for Puglia with flights to many destinations.

What are the Apulian airports? Where is the airport in Puglia?

The main Apulian airports are in Bari, Brindisi and Foggia.

There is a railway station at the airport that connects Bari and nearby cities.

It is the most strategic airport for Puglia if you want to reach the north of Puglia . Foggia (the northernmost province of Puglia) is 125 km from Bari airport.

Brindisi airport is located 112 km south of Bari airport. It is the most strategic airport for Puglia if you want to reach Salento .

Lecce (the southernmost province of Puglia) is in fact only 46 km from Brindisi airport.

Foggia airport is located in the immediate vicinity of the city.

It is mainly used for connecting flights with the Gargano. In the last ten years it has seen a notable increase in passenger traffic.

Car rental and transfer services are available in all airports for Puglia .

Who flies to Puglia? Find out which airlines fly to Puglia

The airlines to fly to Puglia are:

Flights from nyc to puglia italy

What are the new flights to Brindisi (Puglia) in 2022?

Since the spring of 2022, new air routes have been added with flights to and from Brindisi which will allow tens of thousands of more tourists to discover Puglia every year. Some air sections already present will also be strengthened.

The new flights to Brindisi (Puglia) from spring 2022 are:

Here is a table with flights to Bari containing the airline, city and the country of departure:

To get more information, updated and detailed, on flights to Bari (such as the place of departure, day and time), you can consult the official map on the website of Aeroporti di Puglia http://www.aeroportidipuglia.it/bari/the-destinations (click on the markers of the city of departure and then on "View flight schedule").

Flights from UK to Bari or Brindisi

Here is a table with flights to Brindisi containing airlines, city and country of departure:

To get more information, updated and detailed, on flights to Brindisi (such as the place of departure, day and time), you can consult the official map on the website of Aeroporti di Puglia http://www.aeroportidipuglia.it/brindisi/the-destinations (click on the markers of the city of departure and then on "View flight schedule").

Starting from 30 September 2022 there will be flights 4 days a week from Foggia Gino Lisa airport.

The flights will depart from Turin and Milan and will be operated by the Lumiwings company, which operates in Italy and Greece.

To book a flight to Foggia visit the page on the website Lumiwing https://www.lumiwings.com/book-your-flight-now.

Here is a table with flights to Foggia containing the name of the airline, the city of departure and the country of departure:

Which one is the airport for Salento?

The ideal airport to quickly reach Salento is Brindisi airport.

All the timetables and stops of the public service shuttle buses that connect Salento Airport and Bari Airport with the main tourist resorts of Puglia.

Holidays in Puglia 2022 advices and itineraries

Travel to Puglia Covid rules and requirements. Covid Puglia situation updates to travel on holiday to Puglia in 2022